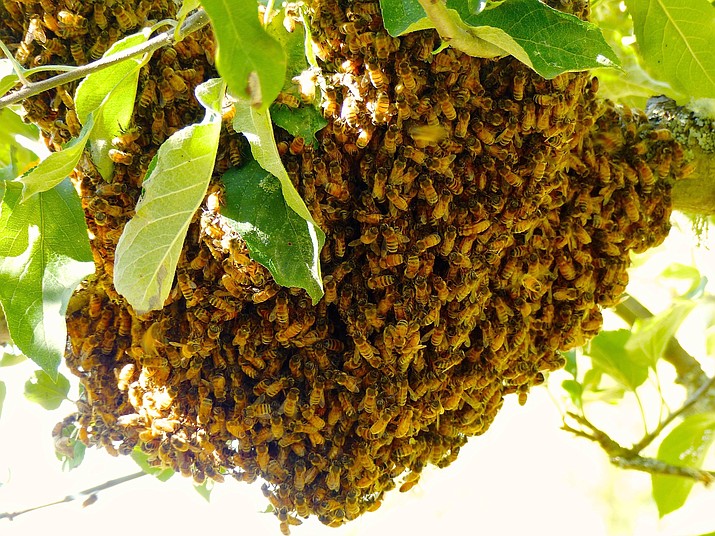 A honeybee swarm cluster gathers on an apple tree near Langley, Wash. Honeybees generally swarm a short distance and then hang out for a short time on tree limbs, stop signs, the sides of houses or perhaps in playgrounds. They can be recovered and installed in new hives if done quickly as was the case with this swarm cluster. (Dean Fosdick via AP)

When half or more of your honeybees have deserted the hive and are lingering nearby, who ya gonna call? Swarm chasers can provide quick help to fellow beekeepers, keeping them from getting stung literally and financially.

"A swarm is the division of the honeybee colony into two parts," said Donald Lewis, a professor and Extension entomologist with Iowa State University. "One part of the colony will stay where they'll continue to grow, reproduce and make honey. The swarm leaves the colony in search of a place to set up elsewhere."

In the Greater Prescott area, contact www.prescottbeekeepers.com for information regarding bee relocation and educational materials.

Swarming generally occurs because the colony is crowded, or it could be caused by genetics, Lewis said. "There is a predisposition in some bee strains that makes it more likely for them to do that," he said.

Sometimes, it's simply a matter of a new queen pushing the old queen out. "The old queen would go with the swarm, taking half the existing colony and all the honey they can carry when they depart," Lewis said.

"A swarm generally flies a short distance and then hangs out on tree limbs, stop signs, the side of a house or perhaps in a playground. They'll wait for the scouts to return and tell them where their new location will be," Lewis said.

The likelihood that a swarm can become a thriving feral bee colony depends primarily on where their new home is, Lewis said.

"Here in the Midwest, if the swarm cannot get inside a protected location, they're not likely to make it through the winter."

Beekeepers can prevent losing a colony by dividing it ahead of time; by re-capturing the swarm cluster and placing it in a new hive; or by buying a honeybee variety known for its low tendency to swarm, Lewis said.

If you've lost or simply spotted a swarm cluster, it may pay to find someone who, for a price or simply a new strain of honeybees, is willing to round them up.

"I only work with honeybees," Maxwell said. He won't deal with swarms that have collected too high (15 feet or more) or that are enclosed in ceilings, crawl spaces and brickwork like fireplaces. Those cases are "too much work, and it can be messy with brood and honey," he said.

Swarm clusters on limbs or branches can easily be dropped or shaken into a box, Maxwell said. He often uses a vacuum with an adjustable suction setting that doesn't harm the queen or worker bees.

Unless provoked, bees seldom sting when they swarm, he said. "Swarms are usually not in the stinging mode because they have gorged themselves on honey to start the new hive."

If you do see a swarm, don't panic, throw rocks at it or spray it with an insecticide, Lewis said.

"These are beneficial insects," he said. "You don't have to needlessly kill them. Simply give them a wide berth and chances are, they'll be gone in a day or two."

Spring is busy time for bees and their keepers
Prescott woman is buzzing about her bees
Talk of the Town: Africanized honeybees are a danger, but this region needs them
Swarm Weather! What you should do if you encounter bees
Bring out your bees!: Dewey man offers to remove bee swarms free of charge