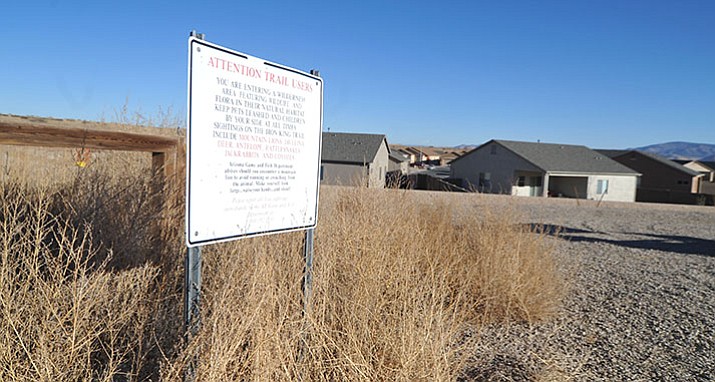 The entrance to the Iron King Trail is now surrounded by homes and will eventually have homes on both sides in the area of the new Jasper subdivision that is north and west of the newest sections of the Granville subdivision in Prescott Valley. (Les Stukenberg/Courier)

The developer of the Jasper development located south of Highway 89A and west of the Granville subdivision received a unanimous recommendation from the Prescott Valley Planning and Zoning Commission at the Dec. 11 P&Z meeting to forward the request to the Town Council for its Phase I Preliminary Development Plan.

A larger than usual crowd participated in the public hearing and discussion on the proposed 362 lots in Phase I of the development previously known as Glassford Heights. The entire development will add 3,587 residential units on 1,245 acres of annexed property in Prescott Valley.

Residents appeared mostly concerned with the Iron King Trail and trailhead that partially exists within the subdivision. The owner, Arizona Eco Development, has agreed to set aside 6.8 acres per 1,000 residents for park improvements.

Town staff support the developer’s engineer reports on traffic impact, drainage and grading plans, and wet utilities. The town “upsized” sewer lines to the east of the development, the cost of which will be passed along to the development. The town also assessed a sewer capacity charge on each building permit, which helps pay for future expansion of the sewer facility.

The developer is responsible for water wells, and retains the option of conveying those wells to the town in the future. The town may work with the developer on augmented water storage tanks at the town’s expense.

The primary access to Jasper is Santa Fe Loop Road. Later, when unit thresholds are reached, a third access, Alcoma Drive, may be constructed. Plans to extend Stoneridge Drive indicate completion by the time of construction of the 700th dwelling unit.

Several residents spoke about the increased use of Prescott East Highway as a shortcut north to Santa Fe Loop and Highway 89A. The extension of Stoneridge Drive should alleviate that, said James Gardner, town planner.

Granville residents expressed concerns about what is happening along the Iron King Trail. Many said they were attracted to buying in Granville because of the trail.

Parker explained that the grading and scraping currently taking place 50 feet to either side of the trail is to comply with drainage and runoff plans.

Rick Radavich, with Prescor Builders, assured residents that the area alongside the trail will be landscaped.

Resident Jim Switzer said he was out on the trail recently and noticed about three dozen pronghorn that “looked lost,” and wondered about efforts to remove the animals. The Arizona Game and Fish Department is looking into the pronghorns and their decreasing habitat.

Other concerns Parker said the town will look into immediately include dust kicked up by the heavy machinery, the Iron King Trail and trailhead being blocked by equipment and fencing, noise reduction treatment on Glassford Hill Road, and landscaping down the center divider of the internal roadways.

As for a convenience store popping up in Jasper, he said there was “zero chance” of that happening. In February, the town will look at the 80 acres of open space that will be dedicated to the town.

“The Iron King Trail is important. We see it as a jewel,” Parker said.

In another two-and-a-half weeks, the grading along the trail should be completed. In the meantime, he said, he will look into providing more water for dust abatement.