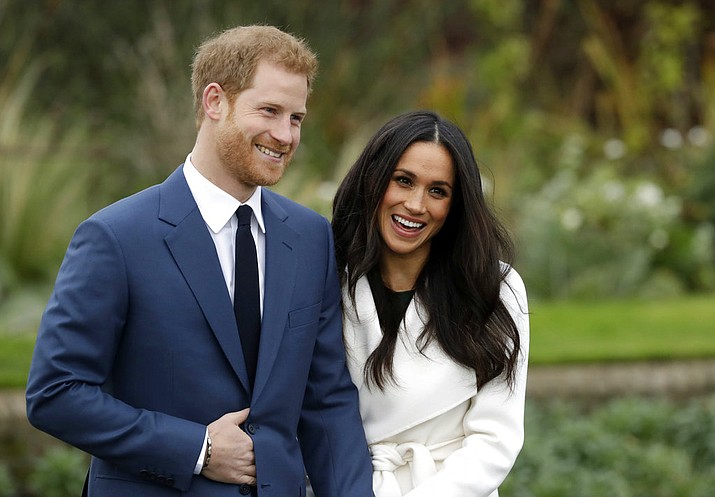 Britain's Prince Harry returns to the stand as he takes part in the Sovereign's Parade at The Royal Military Academy Sandhurst in Sandhurst, England, Friday, Dec. 15, 2017. Prince Harry and Meghan Markle will marry on May 19 in St. George's Chapel at Windsor Castle, Kensington Palace announced Friday. (AP Photo/Alastair Grant)

LONDON (AP) — Prince Harry and Meghan Markle will marry in St. George's Chapel at Windsor Castle on May 19 — the same day as one of the biggest English sports events of the year, the FA Cup final.

The date was confirmed Friday by the prince's Kensington Palace office.

While most British royal weddings are on weekdays, this one is a Saturday, and the same day as the soccer showdown at London's Wembley Stadium.

Harry's grandmother Queen Elizabeth II and other royals are expected to attend the wedding, along with Markle's parents, Thomas Markle and Doria Ragland.

The climax of soccer's oldest cup competition could present a distraction for guests at the royal reception, although the events should at least be at different times. The FA Cup competition, which is open to hundreds of teams all the way from the top-ranked Premier League down to amateur clubs, began in August and is played every month until two teams meet in the final.

England's Football Association said in a statement that "May 19 promises to be a wonderful day with such a special royal occasion being followed by English football's showpiece event."

The timing could be an issue for Harry's older brother Prince William, who is expected to be the best man at the wedding. William is president of the Football Association. He attended this year's match and presented a trophy to the winner, Arsenal — but will likely be otherwise engaged in 2018.

Harry is an Arsenal fan, and may find himself conflicted if his team makes the final for a fourth time in the last five years.

The prince and Markle announced their engagement last month after an 18-month romance.

Why do you think Americans are so fascinated by royal weddings? (Select one top choice)

The 33-year-old prince, who is fifth in line to the British throne, and the 36-year-old divorced American actress met through a mutual friend in 2016, bonded during a camping holiday in Botswana and managed to keep their relationship secret from the media for several months.

In a joint interview last month, Markle said Harry proposed over a roast-chicken dinner at home. He gave her a ring set with two diamonds that belonged to his late mother, Princess Diana.

Markle is to be baptized in the Church of England before the wedding, and has said she will acquire British citizenship. That will require passing an eclectic citizenship test on British life and history that is famous for tripping up applicants.

The wedding venue holds a central place in the history of the royal family.

Windsor Castle, west of London, is one of Queen Elizabeth II's main residences. The 15th-century chapel is as historic but more intimate than Westminster Abbey, where William married Kate Middleton in 2011.

When the engagement was announced, the palace said the wedding of Prince Harry and Markle will "reflect their characters and personalities" and be a moment of "fun and joy."