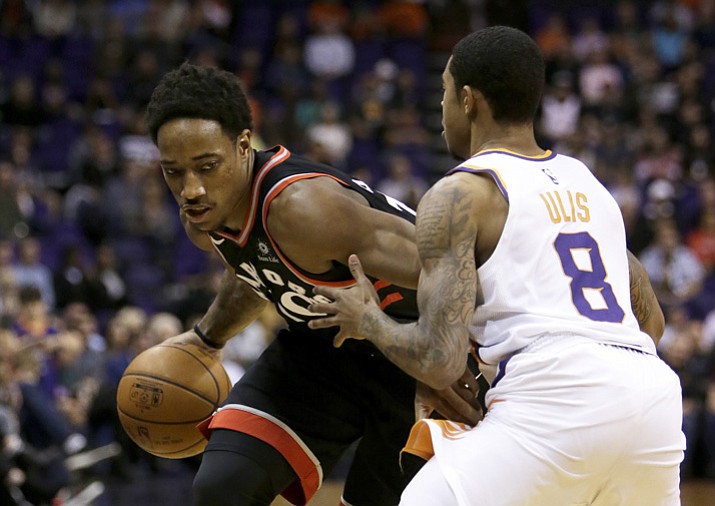 PHOENIX — DeMar DeRozan matched his season high with 37 points and the Toronto Raptors beat the Phoenix Suns 115-109 on Wednesday night for their seventh victory in eight games.

DeRozan scored 18 points in the third quarter and Toronto led by as many as 15 before the Suns rallied in the fourth.

Toronto was 3-1 on its four-game trip. Phoenix was lost five straight and seven of eight — the last four losses with star guard Devin Booker sidelined by a groin injury.

Serge Ibaka had 21 points and 13 rebounds, and Jonas Valanciunas added 20 points and 11 rebounds for the Raptors.

Troy Daniels led the Suns with a season-high 32 points on 11-of-16 shooting, including 7 of 10 on 3-pointers. His 3 with 11:12 to go in the fourth quarter and short jumper moments later cut the Raptors' lead to 92-87, and the Suns took advantage of a long scoring drought for the Raptors to pull within three with 9:22 left.

The Suns got as close as 111-109 with 22.8 seconds to play when Daniels knocking down a 17-footer. But DeRozan and Kyle Lowry each hit a pair of free throws in the final seconds.

Greg Monroe added 17 points and 11 rebounds for Phoenix, and T.J. Warren had 17 points.

The Raptors hit 5 of 7 3-point attempts in the first quarter and Valanciunas scored 10 points, giving Toronto a 37-31 lead after 12 minutes.

The Suns went ahead 46-43 midway through the second quarter on the third 3-pointer of the night for Daniels, who scored 14 first-half points. The Raptors finished the half on a 15-6 run to take a 58-52 lead.

Suns center Alex Len leaped to grab a first-quarter shot from DeRozan that was on its descent. The ball was nowhere near going through the hoop, but Len was whistled for defensive goaltending and DeRozan was fouled on the shot, scoring a three-point play.

Raptors: C Lucas Nogueira (right calf injury) and G Delon Wright (right shoulder) did not play. ... The Raptor swept the season series with Phoenix for the first time since the 2012-13 season. ... DeRozan has 86 career 30-point games, second-most in franchise history behind Vince Carter's 91.

Suns: Phoenix signed G Isaiah Canaan after receiving an injury hardship exemption from the NBA, with six players inactive Wednesday. Canaan, in his fifth NBA season, did not play. ... C Tyson Chandler was not with the team, the second time in a week he missed a game for personal reasons. ... Suns coach Jay Triano, the first Canadian-born head coach in NBA history, was the Raptors head coach from 2008 to 2011 and was an assistant with Toronto from 2002 to 2008.

Suns: At Minnesota on Friday night.