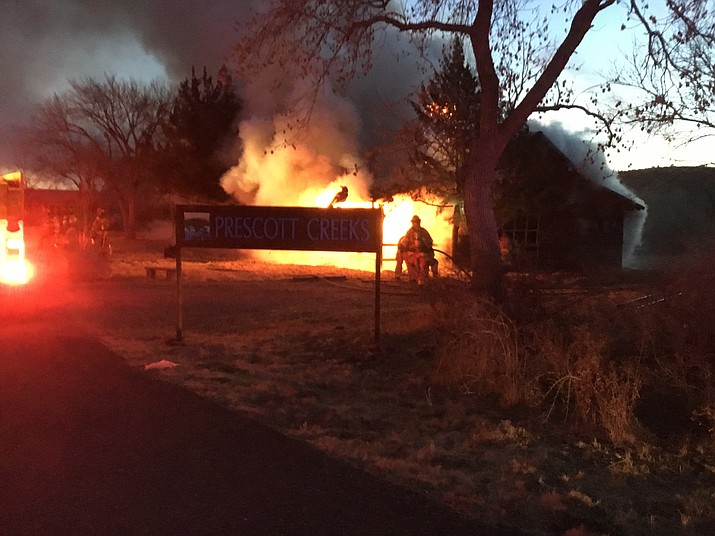 A fire started at this log cabin on Highway 89 and Rosser Street Sunday. Firefighters battled it for nine hours and thought they had it out, but the fire rekindled on Monday.

A log cabin converted to an office along Highway 89 in Prescott caught fire Sunday morning, Dec. 10, setting off a prolonged battle to extinguish it, said Don Devendorf, Prescott Fire division chief, but then it caught fire again, Monday morning.

Firefighters first responded to the cabin, at the intersection of Highway 89 and Rosser Street, on Sunday.

The initial challenge they faced: the nearest hydrant was across the highway. The road had to be shut down so a hose could be stretched from a hydrant from the opposite side of it.

Firefighters tried to get inside the cabin, but the fire was heavy and they had to work it from outside.

It took “a couple of hours” to get the fire under control, Devendorf said, “because there were many hidden compartment fires that kept popping up.”

Making the fire even harder to extinguish was the roof construction, which was a dual layer, with the space between filled with sawdust, apparently as an insulation technique, Devendorf said.

Nine hours after the call came in, fire crews left the scene.

Monday morning, Devendorf said, “The fact that they used sawdust as insulation makes it almost impossible to assure the fire is completely out. When we left yesterday, our infrared cameras showed no heat and there was no smoke.

“We had a feeling we were going to have to tear the roof off to get it all the way out yesterday but were hoping to not have to do that,” he said. “Well, that’s what it’s come to now.”

Highway 89 was closed for a short time again, until a water tender was brought in.

“This building was constructed in 1957, and had been remodeled and added on to, with modifications to all building systems, made fighting this fire difficult,” Devendorf said.

No one was injured in the fire, and the cause is still under investigation.