California uses supertanker to fight fires, but Arizona doesn’t
GAO sides with manufacturer in a complaint against USFS 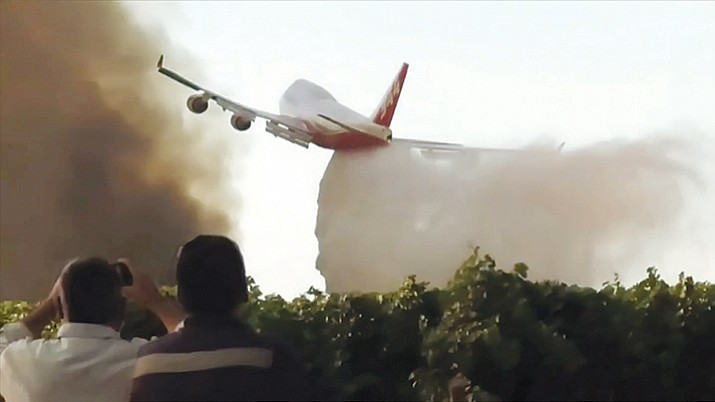 A Global Supertanker drops retardant on a fire in Argentina. The US Forest Service was recently told its refusal to use the plane had no logical basis. (Courtesy)

This year residents in this area witnessed the Goodwin Fire, which forced some to leave their homes, and we paid close attention to the wildfires in California, that caused so much death and destruction.

Give firefighters the best tools to save us

This summer, as the Goodwin Fire threatened Mayer, many Arizonans wondered why the world’s largest air tanker wasn’t dumping slurry on it.

The question has arisen again with Global Supertanker’s converted 747 being used heavily in the battle to fight the wildfires raging in southern California.

The answer comes down to who pays the bill.

Someone has to write the check for the operation of the massive jumbo jet.

So far, the U.S. Forest Service, which oversees firefighting operations in Arizona, won’t do that.

But in California, things are run differently: the fires there are overseen by a state agency, the California Department of Forestry and Fire Prevention, known as CalFire.

CalFire has no problem with hiring the Global Supertanker.

The U.S. Forest Service had not been especially public about its objections to using the 747, which falls into a category of aircraft called “Very Large Air Tankers,” or VLATs. Also in that category are the re-fitted DC-10 air tankers operated by 10 Tanker Air Carrier, which the Forest Service does use.

According to the GAO’s report, the Forest Service refuses to contract with Global Supertanker primarily because it uses tanks larger than 5,000 gallons to carry the retardant.

“(Global Supertanker) asserts that, because it and 10 Tanker are the only two companies whose aircraft have tanks larger than 5,000 gallons, the restriction is knowingly targeted at excluding their aircraft,” the GAO report said.

The GAO agreed, saying, “We are unable to conclude that the specifications … are necessary to meet the agency’s needs” and suggested that the tank-size decision was arbitrary.

The Forest Service’s specifications for which aircraft they will use said those planes must be suitable for both “initial attack” and “extended operations,” and it determined that the 747 was not suited for initial attack.

It did not explain, however, why that would exclude the 747 from being contracted for extended operations, nor did the Forest Service explain why it had used the DC-10s on hundreds of missions in 2017, despite the DC-10s also being in the VLAT category.

CalFire views the 747 as “another tool we use.”

They’re technically testing it until the end of 2018, after which it will be evaluated, but it’s “under a temporary license, let’s say, to be able to fly on these fires,” said spokesman Scott McLane. “CalFire did card (permit) the Supertanker during the summer months this year.”

McLane said tank size is not an issue for CalFire.

“We’re talking 18,100 gallons that (747) aircraft carries and drops. We’re looking at the DC-10, which is also on the southern California fires … it carries 11,800 gallons of retardant, and it’s being used aggressively as well.”

Jennifer Jones, spokeswoman for the U.S. Forest Service, said “In accordance with regulations, the U.S. Forest Service is complying with the U.S. Government Accountability Office decision … We are reviewing our documentation. After the review is completed, the agency will determine the most appropriate ways to continue to procure Large and Very Large Next Generation Airtankers.”

A representative of Global Supertanker referred questions to the GAO report.

Measure introduced to get 747 Supertanker into service in Arizona
747 could have been used on Goodwin Fire, but it hasn’t been called
Editorial: Give firefighters the best tools to save us
Huge firefighting plane that costs $250K per day ready for wildfire season
Officials hope to begin Supertanker testing soon in Marana