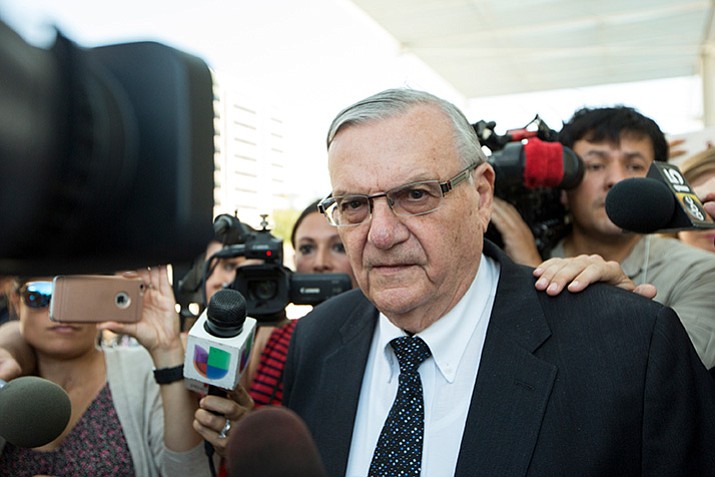 FILE- In this July 6, 2017, file photo, former Sheriff Joe Arpaio leaves the federal courthouse in Phoenix, Ariz. Arizona jurors who will decide a malicious-prosecution trial against Arpaio were told Tuesday, Dec. 5, 2017, that one of Sen. Jeff Flake's sons suffered from depression as a result of a now-dismissed animal cruelty case that the lawman brought against him. (AP Photo/Angie Wang, File)

PHOENIX — Former Arizona Sheriff Joe Arpaio was unable to cite any evidence on the witness stand Wednesday to back up his now-dismissed animal cruelty case against one of U.S. Sen. Jeff Flake’s sons in the 2014 deaths of 21 dogs.

The former six-term sheriff of metro Phoenix told jurors he felt his detectives had gathered the proper evidence to recommend charges after the dogs died of heat exhaustion. He repeatedly declined to explain his confidence in the investigation into Austin Flake and his then-wife Logan Brown, who were caring for the animals at a kennel operated by Brown’s parents.

“Once again, I don’t have the nuts and bolts,” Arpaio said. “The detectives handled it.”

Arpaio was the first witness to testify in the malicious-prosecution lawsuit filed by Flake and Brown. It alleges Arpaio pursued charges against them to do political damage to the Republican senator from Arizona and gain publicity for himself.

They say the criminal case caused them emotional distress and contributed to the demise of their marriage.

Under questioning from Arpaio attorney Jeffrey Leonard, the former sheriff said he didn’t pressure his investigators or prosecutors to bring charges.

The case against the Flakes was dismissed at the request of prosecutors, and the owners of the kennel pleaded guilty to animal cruelty charges after an expert determined the facility’s air conditioner failed because the operators didn’t properly maintain it.

The media-savvy lawman also was grilled over his motivations in publicizing the investigation, saying he spoke out about the dog deaths because it was a serious matter and reporters asked about the case.

He downplayed the number of news conferences he called to discuss the case and was unable to explain why he told reporters shortly after the investigation began that the deaths were suspicious, when his spokesman had called them a tragic accident a day earlier.

“What turned it from tragic accident to highly suspicious in 24 hours?” asked Stephen Montoya, an attorney representing Flake and his ex-wife.

“I don’t know,” Arpaio answered. “Maybe someone had an opinion.”

His low-key demeanor during the trial contrasted with the blustery style he had shown through the years in his news conferences and political events. His voice wasn’t booming in court as it often is before TV cameras. He instead spoke in a subdued voice.

Jurors were played a 22-minute video of a September 2014 news conference in which Arpaio announced that he was recommending charges against the Flakes and kennel operators.

Montoya asked Arpaio about speaking to another gathering of reporters just days after the deaths and displaying photos of the dead dogs.

Arpaio said he didn’t consider the gathering to be a news conference and explained that it grew out questions reporters had about a news release his office sent about the investigation. The event was held at a podium in the sheriff’s office where Arpaio regularly spoke to reporters.

The only mention of Sen. Flake during the testimony so far came when Montoya asked Arpaio whether he knew that making a criminal case against the son of a U.S. senator would bring national and international media attention.

“I don’t know,” Arpaio said, adding that he doesn’t care about the last names of the people his office investigated.

Arpaio declined to say whether his recommendation to charge the Flakes was a mistake, given that a judge has since ruled that there was no probable cause to charge them.

Lawyers for Austin Flake and Brown have said previously that the senator drew Arpaio’s ire by disagreeing with the sheriff over immigration and criticizing the movement that questioned the authenticity of then-President Barack Obama’s birth certificate.

Arpaio was known for carrying out dozens of large-scale immigration crackdowns and conducting a five-year investigation of Obama’s birth record.

The sheriff’s attorneys are expected to get a chance later Wednesday to question their client on the stand.