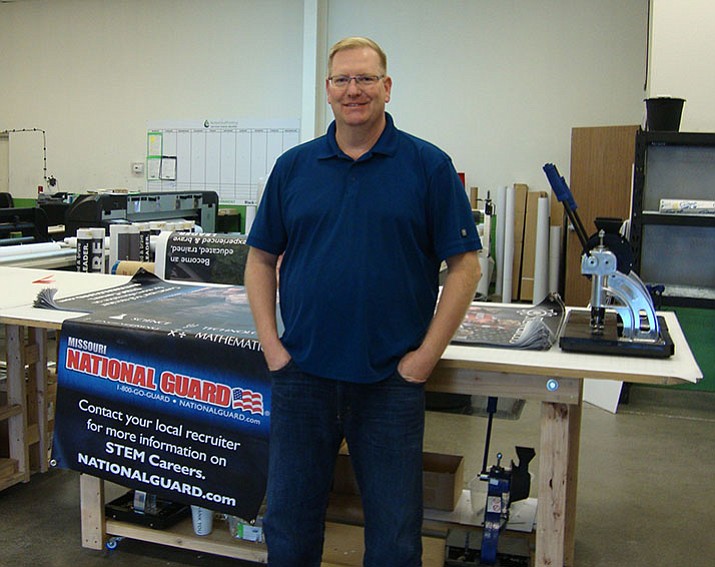 The National Veteran’s Business Owned Association (NaVOBA) has selected Larry Curell, owner of Better Deal Printing, as their 2017 Franchise Vetrepreneur of the Year. Curell was honored at the national convention on Nov. 9, 2017 at the Herberger Theater Center in Phoenix.

From humble beginnings, Curell has taken his business, with his own ingenuity and the help of SCORE mentors, from a simple idea to the national stage. After becoming disabled during his military service he went through the VA’s vocational rehabilitation program.

He switched from a corporate job to self-employment based in his garage with a copy machine and a long-range vision. As part of the process for approval to participate in the program he was required to have a viable business plan.

He was paired with Tom Roegge, now a SCORE emeritus. Joe Van Bourgondien, who left SCORE to work with a local international business, joined with Roegge to develop the projections and write the letter that allowed Curell to enter the VA program. Once he began, the VA invested about $30,000, sent him through a 9-month graphic design course and provided him with his first printer.

He functioned out of his garage for about the first year and a half and eventually moved into a space in the Prescott Lakes Commerce Center opening with one machine and a poster printer, brokering any jobs he was unable to do on-site. But sources were unreliable, so Curell went back to SCORE and received guidance in the manufacturing process.

Roegge asked him if he “was fishing in the right pond.” That small query caused Curell to think about possibilities beyond the Arizona market. He worked with Roegge to take his business to the national level.

Roegge helped Curell to develop categories of customers ranging from local to international, including government. Curell then purchased two additional printers and hired his first full-time employee. The space next door eventually became available and Better Deal Printing expanded again, outgrowing that within a year.

Never one to rest on his laurels, Curell went back to his SCORE mentor, Roegge, and then decided to franchise. It was essential that, in a saturated market, he had to cast a wider net. Six years later he has moved to a space near the Prescott airport, 6750 Intercal Way, Prescott, AZ 86301.

With a heavy investment in technology and 11 employees, Curell is able to produce almost everything in house. His production covers the standard printing processes of business cards, brochures and signage to embroidered and screen printed apparel.

A great portion of his success has to do with impeccable service and rapid turnaround time, getting most jobs out the door within 24 to 48 hours.

Among Curell’s national customers are the U.S. government, the U.S. Army, the Veteran’s Administration, AT&T, Waste Management and General Electric. Currently, he has clients in 21 countries on 4 continents. Plus he provides a large share of the printing done in Northern Arizona. His plans for the future are to have an east coast location to match the production in Prescott. Part of his drive is to employ veterans and to help other vets become establish with Better Deal Printing franchises.

“Without SCORE,” emphasized Curell, “I wouldn’t have been able to see the greater possibilities. I would probably have just remained local.” He credits SCORE with moving him into the national arena.

If you need help starting or growing your business or to get your own SCORE mentor call 928-778-7438 email: scoreoffice@scorenaz.org or go to www.northernarizona.score.org.