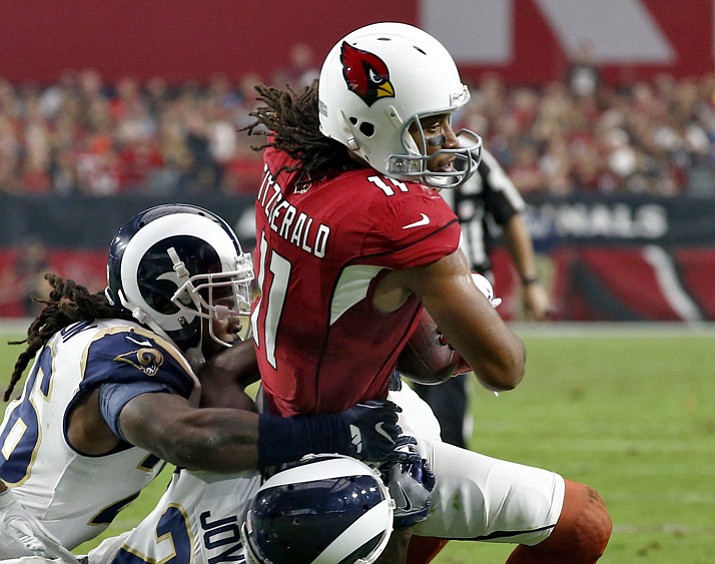 GLENDALE — For the first time in 14 years, the Rams will have a winning season.

And maybe much more.

Jared Goff passed for two touchdowns, Los Angeles took advantage of two early interceptions thrown by Blaine Gabbert, and the Rams solidified their grip on first place in the NFC West with a 32-16 victory over the Arizona Cardinals on Sunday.

The Rams (9-3) won for the sixth time in seven games to clinch their first winning season since 2003, when they were in St. Louis.

“Long time and very cool,” Goff said, “but no means are we finished.”

They took the season series with the Cardinals for only the second time in the last 14 years and first since 2012.

The Rams had routed the Cardinals in London 33-0 on Oct. 22 and were in the lead almost from the start of this one. Gabbert’s interceptions helped Los Angeles score 16 early points, including Alec Ogletree’s 41-yard interception return for a touchdown, and the Rams led the rest of the way.

The Rams added an 11-yard touchdown pass from Goff to Sammy Watkins in the third quarter and got a blocked field goal from Michael Brockers in the fourth, when Arizona could have cut the lead to seven.

With Adrian Peterson sitting out with a neck injury, and despite playing with cracked ribs, Kerwynn Williams carried 16 times for 97 yards, three shy of his career best.

“Knowing Kerwynn, he was going to give us everything he had all day,” Arizona coach Bruce Arians said. “... He was a sparkplug to get us back in the game.”

Gabbert, in his third game since taking over as Cardinals starter, completed 18 of 32 passes for 221 yards and a touchdown. Larry Fitzgerald caught 10 passes for 98 yards and a score.

Arizona, entering the game last in the NFL in rushing, gained 56 yards in eight plays on the ground in a drive capped by Elijhaa Penny’s 2-yard touchdown run to cut the lead to 16-7.

After a three-and-out by the Rams, Williams’ 25-yard run started a six-play, 70-yard TD drive that culminated with Gabbert’s 15-yard touchdown pass to Fitzgerald. The conversion kick was blocked and Arizona was down 16-13 with 3:25 play.

The Cardinals barely kept Los Angeles out the end zone on the Rams’ final drive and Zuerlein’s 20-yard field goal put LA up 19-13 at the break.

The Rams opened the game right where they left off in that blowout win in London. They got a 56-yard field goal from Zuerlein on the game’s first possession and, on Arizona’s first play from scrimmage, Gabbert’s deep pass was intercepted by Lamarcus Joyner and returned 46 yards to the Cardinals 23. Seven plays later, on fourth-and-goal from the 1, Goff threw to Gerald Everett for the touchdown. Zuerlein missed the extra point and it was 9-0.

Ogletree intercepted Gabbert’s pass near the line of scrimmage and returned it 41 yards for the touchdown, flipping head-over-heels into the end zone, to make it 16-0 later in the first quarter.

“I saw him kind of fumble the ball and then he actually threw it,” Ogletree said. “I was able to jump up, kind of tip it to myself and catch it. I looked around and saw the open area and took off running and was able to outrun the lineman.”

The Rams were terrific on special teams with a blocked field goal and a blocked extra point.

In the third quarter, Johnny Hekker punted 70 yards from the Rams 9-yard line. After a three-and-out by Arizona, Pharoh Cooper returned a punt 30 yards to help set up Goff’s TD pass to Watkins.

Fitzgerald moved ahead of Isaac Bruce for fourth in NFL career yards receiving with 15,267. He needs 26 yards to pass Randy Moss into third. Fitzgerald is third in career receptions (1,207).

During the game, he joined Jerry Rice and Tony Gonzalez as the only players to top 1,200 career receptions.

Ogletree left the game in the first half with a hyperextended left elbow and did not return.

“For the record, it didn’t happen on the touchdown (flip),” he said.