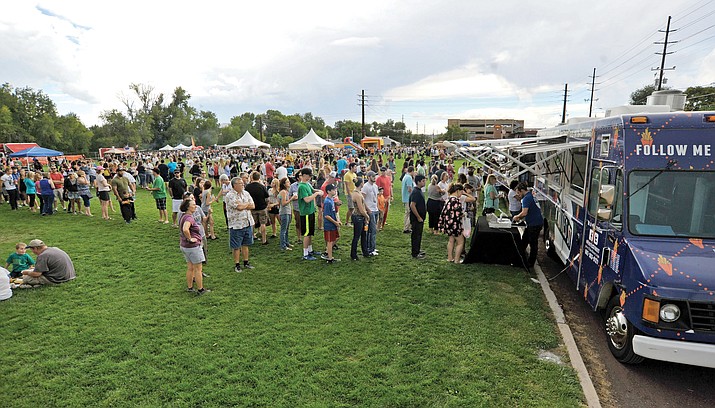 Nothing at this festival costs more than $5, said event organizer Steve Gottlieb, stating that it costs that much to get in and that much for food items, as well as food samples for $2.

“It’s just a fun food truck event,” Gottlieb said, speaking very highly of the food that’s going to be available at the event. “We’ve got good food lined up. I’m real happy with it.”

There’ll also be live music by Funk Frequency from 1 to 3 p.m. along with dancing, two bouncy castles, and a beer garden, Gottlieb said. The festival lasts from noon to 6 p.m. at Mile High Middle School, 300 S. Granite St., on the football field.

This year also sees the festival’s first dessert truck, called The Ice Cream Truck, Gottlieb said. It’s for the kid element as well as how hot the forecast is expected for Saturday.

“The weather forecast is 85 degrees,” he said. “I think it’s going to be a hot one … it should be beautiful.”

Everything has gone really well in putting the festival together this year, Gottlieb said, commenting how scary it’s been to have everything go so smoothly. It’s shocking, he said.

A portion of this year’s proceeds goes to Meals on Wheels Prescott, he said, remarking that doing so is his element as he loves giving checks to charity. Meals on Wheels really helps the community too, providing meals to those unable to leave their house either on a permanent or temporary basis, Gottlieb said.

“They provide more than just food,” he said. “Sometimes, the Meals on Wheels volunteers are the only people they come in contact with.”