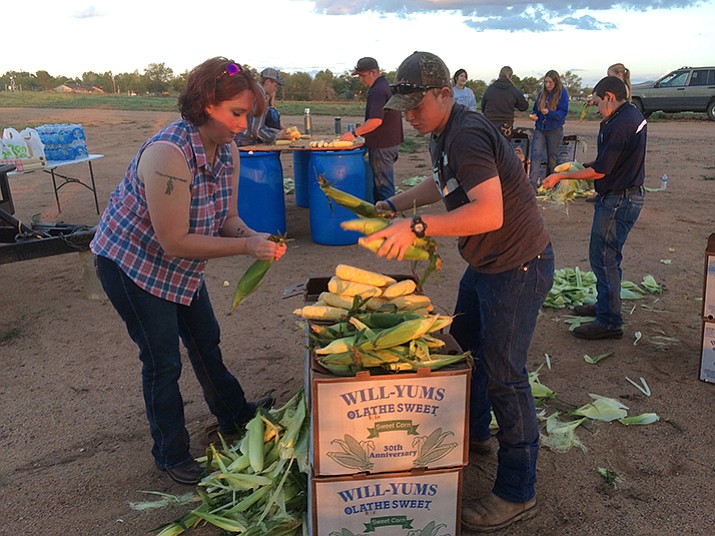 Karen Self and Levi Self shuck corn for the Corn Dinner. (Ken Sain/Courier)

Chino Valley High School agriculture teacher Miles Holder chops the ends off of ears of corn to prepare them for last year’s Corn Dinner. Student Brett Morris is in behind him, shucking corn. (Ken Sain/Review)

The corn won’t have to travel very far before ending up in someone’s stomach at this year’s FFA Corn Dinner.

For the 67th annual FFA Corn Dinner, all the corn for the dinner has been grown at the high school, said Chino Valley High School agriculture teacher Miles Holder. It’s the first time that’s ever been done, Holder said.

“The students and myself, we’re growing the corn at the farm, so it’s a pretty big feat,” he said. “We wanted to get the kids more involved and it’s cheaper to grow our corn that it is to buy it and it’s a great experience for the kids.”

It’s delicious and sweet, Holder said, mentioning that the corn was planted at the end of May right when school was getting out. The kids helped get the fields ready and the crop has been growing ever since, he said. Right now, it’s about six and a half feet tall, Holder said.

The kids have been really excited about growing their own corn, he said, commenting it’s nice to see them take ownership and have a lot of pride in the dinner.

At the same time, there have been a lot of donations from businesses around the area for this year’s raffle, Holder said. This year’s raffle will include a lot of gift cards and half a cord of wood from C & M Firewood, who is also donating the wood used to cook the meat, he said.

“It’s good seeing the community come together and help out,” Holder said. “They better come out for this corn because it’s the best corn there is.”

Proceeds from this year’s raffle items will be donated to the Goodwin Fire relief.

It’ll be a busy day for Chino Valley FFA, he said, remarking that the group has a float in the parade as well. Still, it’s definitely rewarding, Holder said.