Fall Preview: Badgers not satisfied with final four appearance in 2016
Prescott graduates 8, but still plenty of fire-power left for 2017 run 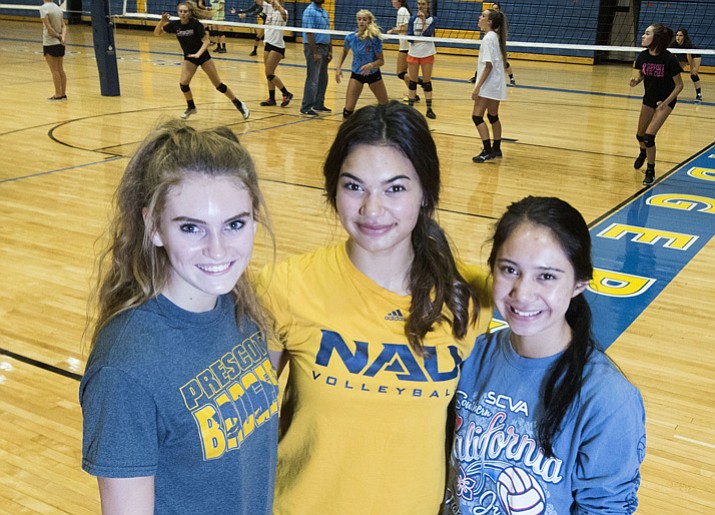 Twenty-nine wins and a final four appearance in the 4A state playoffs would satisfy most programs in Arizona, but for the Prescott volleyball team, it’s only one more step on the proverbial ladder towards a championship.

Like last season, the Badgers enter this fall having lost most of their lineup. The eight seniors who suffered a 3-0 loss to Salpointe Catholic in the state semifinals have graduated, including former Prescott standouts Ashlynn Uvila, Abbey Smith, Alex Koehler and Erinn Marroquin.

But with a new season comes fresh faces still committed to one thing: Winning a title.

“We really want to get to state this year and hopefully go all the way since we didn’t quite make it last year,” Daphne Skinner said at practice Tuesday. “I think if we work really hard, I think we can do it.”

The 5-foot-10 senior outside hitter said they have an entirely new team this fall, but it hasn’t deterred her focus, or her teammates’ resolve.

“I think with practice we can click together and start playing well like we did last year,” Skinner said.

Madison Wood, a 5-foot-8 senior outsider hitter for Prescott, agrees with her teammate, adding “a lot of progress” has been made since the beginning of camp.

“We’re having a lot of fun and making a lot of good connections. I’m bonding with these girls a lot better than I did last year, actually,” Wood said. “I think we’re working hard to win state this year.”

Junior libero Sabina Dimaano-Simmons believes all that “hard work” is paying off, especially on the defensive end.

“Our strength as a team is our defense, and how we get out of the serve-receive really fast,” Demaano-Simmons said, adding Prescott head coach Josiah Ramirez has mixed in a lot of six-on-six scrimmages during practice, forcing the club to work together.

“Everyone gets involved,” Demaano-Simmons said. “Then our coach rotates all of us in, so we’re not just playing our own position, we’re playing different positions.”

Among the several top newcomers this season is 5-foot-11 senior outside hitter Sarah Griffiths, while junior libero Angelina Jennison has also made the club. Sophomore Denali Skinner and 5-foot-10 freshman Katherine Radavich have also made the team.

Prescott (0-0, 0-0 4A Grand Canyon) opens the season on the road as they travel south to Peoria to play Sunrise Mountain on Thursday night.

The Badgers will travel to Glendale on Tuesday, Sept. 5, to play Cactus, then host Buckeye in their home opener Thursday, Sept. 7.

All matches are scheduled for 6 p.m.