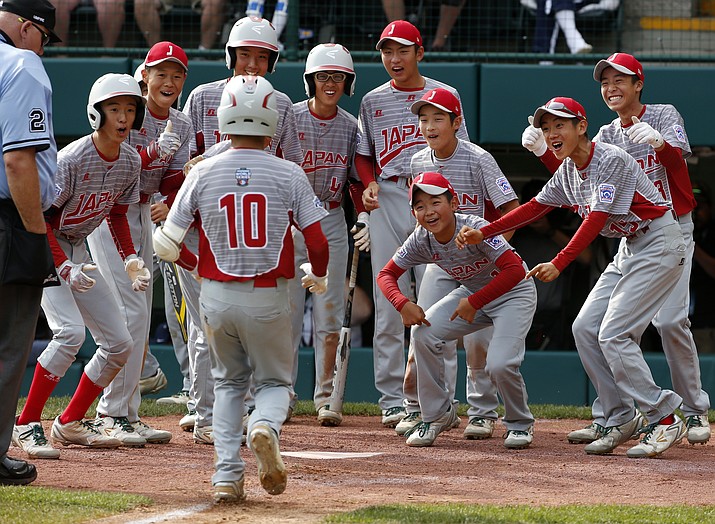 SOUTH WILLIAMSPORT, Pa. — The crack of the bat, the gasp from the crowd, a fist pump on the trip around the bases and then a happy hop to waiting teammates at home plate.

Japan went through the routine three times in the fourth inning of the Little League World Series championship Sunday as Daisuke Hashimoto, Keitaro Miyahara and Natsuki Yajima homered, turning a tight game with Lufkin, Texas, into a 12-2 rout.

Tsubasa Tomii buckled down after allowing two first-inning home runs, finishing with nine strikeouts in a game that was stopped in the bottom of the fifth inning after Japan went ahead by 10 on Yajima’s single to right field to score Seiya Arai.

“We were thrilled after we won the Japanese region before we came here,” Miyahara said through an interpreter. “But now getting to this level and becoming the Little League World Series champions this year, it can’t get any better than this.”

The title marks the 11th time a team from Japan has won the Little League World Series, five of which have come in the last eight years. Tokyo Kitasuna, the club representing Japan this season, has won three of the last six.

Lufkin had a six-run comeback victory over Greenville, North Carolina, in the U.S. championship game Saturday to reach the final. And early on, it looked as though the team’s momentum would carry through the championship.

Japan had allowed only one run in the tournament heading into Sunday’s game, but that changed when Chandler Spencer crushed the first pitch over the left-center field fence.

Hunter Ditsworth cracked an opposite-field homer down the right-field line to put Lufkin up 2-0 with one out in the first. But Miyahara laced a two-run triple with two outs in the second to tie it at 2, and Ryusei Fujiwara fisted a single to right to bring Miyahara home.

Lufkin manager Bud Maddux, who has coached youth baseball for 41 years and won 10 total championships, came just short of the most coveted title, in Little League. He blamed himself for the loss.

“Just like I told them, I’ll take full credit for that,” Maddux said. “We didn’t make some adjustments that we should have. You can’t hang your head because (Japan) beat you. They’re a great baseball team, but we are, too.”

But it was Japan’s day. After Arai slid across the plate with the 12th run, his teammates leaped out of the dugout to hug him near home plate, jumping up and down in celebration.

Miyahara’s home run in the fourth came after he fouled a ball off his left leg and was evaluated by the trainer before stepping back into the batter’s box.

“I was in pain,” Miyahara said. “But going through all that tough practice in Tokyo, I learned how to focus and forget about that pain and just focus on hitting the ball.”

Japan manager Junnji Hidaka also led the Tokyo team that won the Little League World Series in 2015. When asked to compare the two clubs, he gave the nod to this year’s group of players.

“This team is a little more of a tight-knit group,” Hidaka said through an interpreter. “A lot more happier team.”

Champ Pederson, who was born with Down Syndrome, was enshrined as a member of the 2017 Little League Hall of Excellence class before the title game. He’s the first player from Little League’s Challenger Division to get the honor. The Challenger Division is for youth with physical and mental challenges. Pederson threw out an honorary first pitch alongside former major leaguer Mark Teixeira and spoke to the crowd before the game. He encouraged both Lufkin and Japan to work hard in everything they do and refuse to let adversity stop them from doing what they love. After the speech, Pederson sprinted out to center field and climbed the wall to touch the bust of Howard J. Lamade, for whom the stadium is named.

Mexico beat Greenville, North Carolina, 14-8 on Sunday in the third-place game. Twelve of 14 Reynoso hitters scored a run, and the teams combined for 14 runs in a 53-minute fourth inning. “I didn’t think that we were going to make it this far,” Greenville’s Ashton Byars said. Byars hit his first home run of the tournament Sunday after promising his mom and dad he would knock one out of the park before the LLWS ended. Manager Brian Fields mixed in five pitchers who hadn’t seen the mound all tournament. He said after the game he wanted all his players to experience the LLWS to its fullest.