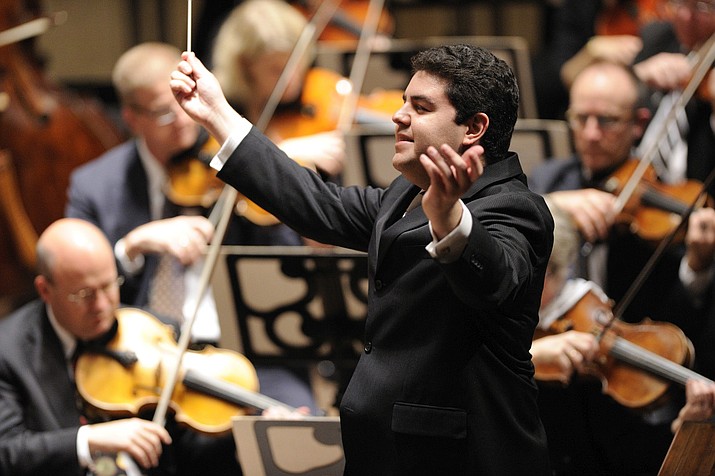 Phoenix Symphony Musical Director Tito Munoz will be conducting each of the symphony's seven concerts at Yavapai College Performing Arts Center. The season begins at 3 p.m. Sunday, Sept. 17, with music by Tchaikovsky, Bernstein and Stravinsky.

The Phoenix Symphony will be returning to Prescott for the upcoming season, presenting seven concerts at the Yavapai College Performing Arts Center.

“This is the 51st year the Yavapai Symphony Association has been bringing the Phoenix Symphony to Prescott,” said David Dunn, president of the association. “We have a tremendous program of classical music performed by one of our country’s best symphony orchestras right here in our hometown.”

The season’s second performance is Nov. 5, when the orchestra will play “Sinfonia Concertante in E flat major” by Mozart, “Symphony No. 1” by Sibelius and Tina Tallon’s “Sear.” Soloists will be Karen Sinclair on violin and Mark Deatherage on viola.

March 18’s concert will feature violinist Steven Moeckel, who is also the concertmaster of the Phoenix Symphony, performing Korngold’s “Violin Concerto.” The orchestra will also play Tchaikovsky’s “Symphony No. 5” and the world premiere of a work by Kenneth Fuchs.

On April 15, Hungarian cellist Istvan Vardai will perform Elgar’s “Cello Concerto” with the orchestra, which also will perform the “Scottish” Symphony No. 3 by Felix Mendelssohn and “Agnosco Veteris” by Nina Young.

The final concert of the season will take place on May 13. Soprano Maria Valdes, baritone Rod Gilfrey, and the Phoenix Symphony Chorus will join the orchestra for Brahms’ “German Requiem.” Rounding out the program is Schubert’s stirring “‘Unfinished’ Symphony No. 8.”

“We believe that this season will be one of the best in recent years,” said Dunn. “We’ll have a great program of traditional classical music with a sprinkling of new compositions.”

All concerts are at 3 p.m. at YCPAC. There is a complimentary lecture prior to each concert. The Association is currently accepting orders for season tickets, which can be purchased by calling the YSA office at 928-776-4255, or stopping by at 228 N. Alarcon St. in Prescott between 9 a.m. to 2 p.m. Monday through Thursday. A seating chart is available to review at the office. Single concert tickets are available for sale beginning Aug. 21.

Additional information can be found on the YSA website at www.yavapaisymphony.org.