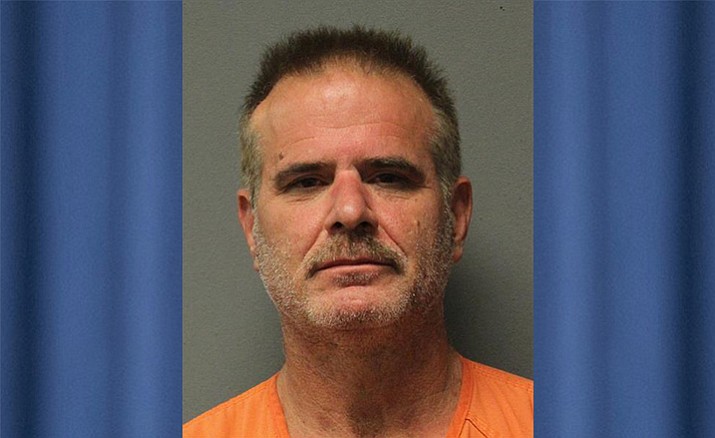 Officers lead Scott Albert Wayne, 54, away from the riverbed in which he was found Sunday afternoon. He was arrested after claiming he was carrying an explosive device in his pants pockets. (YCSO/Courtesy)

A 54-year-old man held law enforcement officers at bay on Sunday, Aug. 20, by threatening to detonate an explosive device made with black powder in his pocket, according to Yavapai County Sheriff’s spokesman Dwight D’Evelyn.

Scott Wayne was the suspect in a domestic violence incident at 8:30 a.m., when he threatened his girlfriend with a gun after learning she was seeing another man, D’Evelyn said.

The girlfriend was able to escape the home, in the 34000 block of South Old Black Canyon Highway, and called for help.

When deputies arrived, Wayne was nowhere to be found, but a Department of Public Safety Ranger helicopter spotted a person the crew believed to be Wayne, hiding in a creek bed outside town.

Deputies arrived and began to handcuff Wayne when he said he had an explosive in his pocket.

Deputies backed off and waited for DPS explosive technicians to arrive. They secured the device in Wayne’s pocket and found another one in his jacket, several yards away, and detonated them in a controlled area.

Wayne’s handgun was also located in the area and recovered.

“Wayne claimed the explosive devices were intended to allow him to commit suicide rather than return to prison,” D’Evelyn said. “He had earlier attempted suicide with the handgun, but it malfunctioned.”

Wayne said he had accidently starting a fire when he threw lit cigarettes into the brush, D’Evelyn said. The fire burned more than 20 acres before it could be controlled.