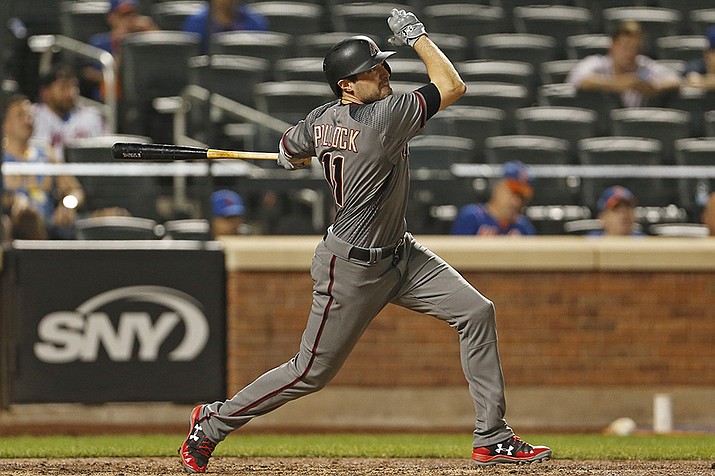 NEW YORK — A.J. Pollock hit a two-run homer in the 10th inning and the Arizona Diamondbacks snapped a three-game skid with a 3-2 victory over the New York Mets on Monday night.

J.D. Martinez had an RBI single and left fielder David Peralta threw out the potential go-ahead run at the plate for the Diamondbacks, who began the day with a 2 1/2-game lead over Milwaukee for the second NL wild card. They are 4-0 against the Mets this season and have won nine of 10 meetings over the last two years.

Pinch-hitter Gregor Blanco walked to start the 10th. One out later, Pollock sent a 94 mph fastball from Erik Goeddel (0-1) over the center-field fence to put the Diamondbacks back in front after they squandered a 1-0 lead in the seventh.

Fernando Rodney gave up a leadoff homer to Michael Conforto before getting three outs for his 28th save in 33 tries.

New York has dropped seven of eight to fall 15 games under .500 at 54-69. During the game, the Mets announced that oft-injured lefty Steven Matz needs another elbow operation, which will end his season.

It was the latest setback for an injury-ravaged pitching staff. New York began the season with World Series aspirations, but Jacob deGrom is the only starter remaining from the projected five-man rotation. Noah Syndergaard, Matt Harvey and Zack Wheeler are all on the disabled list.

Seth Lugo also is sidelined, and another reinforcement, rookie Robert Gsellman, recently returned from a long stint on the DL due to a hamstring injury.

The Mets had plenty of chances to score Monday but went 2 for 12 with runners in scoring position and left 10 runners on base.

In the opener of a four-game set, Arizona starter Taijuan Walker escaped a bases-loaded jam in the second.

Walker gave up consecutive hits with one out in the following inning before getting Wilmer Flores to ground into a double play.

New York put runners at second and third with two outs in the sixth after chasing Walker, but reliever David Hernandez got Kevin Plawecki to ground out.

Yoenis Cespedes’ bases-loaded single to left tied it at 1 with one out in the seventh. Asdrubal Cabrera tried to score from second, but Peralta’s throw cut down Cabrera, who was tagged out by catcher Chris Iannetta.

New York challenged the call, but it was upheld after a replay review.

Diamondbacks: C Jeff Mathis was removed in the sixth with a bruised right hand. ... Arizona manager Torey Lovullo said OF Yasmany Tomas will undergo core surgery for a sports hernia Tuesday in Philadelphia. Tomas, on the DL since June 6, was working to get back before his rehab assignment was shut down in July. The 26-year-old from Cuba hit .241 with eight homers and 32 RBIs in 47 games. . RHP Randall Delgado (strained right elbow) will throw a bullpen Tuesday. . CF Rey Fuentes was scheduled to play a rehab game for Triple-A Reno. SS Nick Ahmed (broken hand) was slated to make an appearance with the rookie-level Diamondbacks. . RHP Matt Koch was recalled from Reno on Sunday, taking the place of Braden Shipley, who was demoted to Triple-A.

Mets: RHP Matt Harvey made his third rehab start, first for Double-A Binghamton after two outings with Class A Brooklyn. He allowed two runs, four hits and one walk while striking out three over three innings. Harvey has been sidelined since June with a stress injury to the scapula bone in his right shoulder. ... The struggling Matz was diagnosed with irritation of the ulnar nerve in his left elbow, the team said. Surgery was recommended to reposition the nerve and relieve the irritation, a similar procedure to the one teammate Jacob deGrom had last year. Matz’s operation will be scheduled in the next few days.

Mets: LHP Tommy Milone (1-2, 7.91 ERA) starts in place of Matz. Milone made three starts for New York earlier this year and recently returned from a long stint on the DL due to a knee injury.