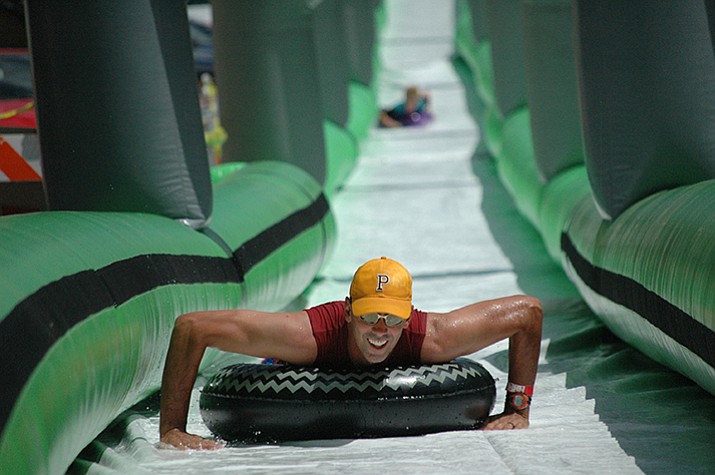 On his way down the 675-foot water slide on Union Street at the 2017 Northern Arizona Monsoon Festival on Saturday, Aug. 19, Brian Patterson had only one thought going through his mind: don’t let his son get down first.

Going down was fantastic, Patterson said, noting that this year was much better temperature-wise.

Sliding down was fun, said Alexia Andujo, commenting on how steep the slide was. Andujo said she wasn’t present for last year’s festival.

The festival turned out perfectly this year, said event organizer Steve Gottlieb, noting how Findlay Auto Group’s sponsorship was fantastic and tantamount to taking the festival up another notch from 2016.

“Last year was a learning curve for us and we got it perfect this year,” he said, mentioning that last year they sold about 800 tickets and this year’s festival was on track to be on pace for that by about 12:30 on Saturday. Gottlieb predicted that once the Black Moods showed up to provide the music it would “pack out a little bit more.”

Last year, the problem was getting the speed up, so this year, the slide started at the top of the hill instead of the flat part on the top, he said.

In doing that, once someone walked on it, they were immediately going downhill, Gottlieb said, remarking that people were “flying down.”

Also, Gottlieb said he was only renting the water for the event as it was all getting pumped into the sewer and right back into the aquifer.

Shannon Merida said it was amazing going down, while at the same time, bringing up how she

could feel every crack and crevice on the concrete after the inflatable part at the top.

Alongside the slide and live music, the event featured a tiki bar and food vendors. A portion of the proceeds from the festival went to the Boys and Girls Club of Central Arizona as well.