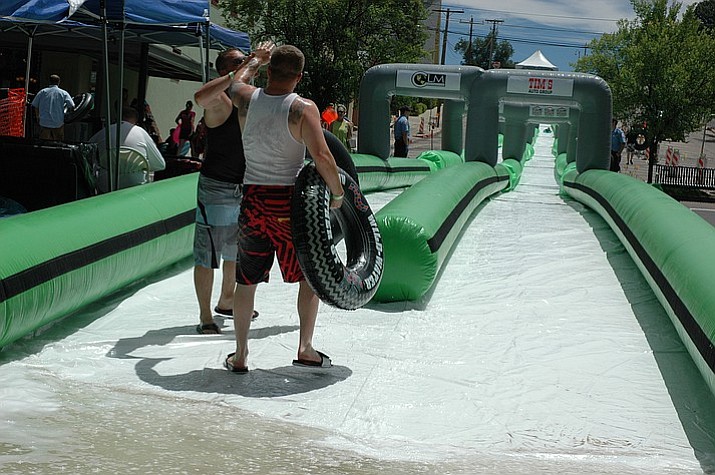 The 2017 Northern Arizona Monsoon Festival is from noon to 6 p.m. Saturday, Aug. 19, on the steep section of Union Street and along the Union/Cortez Street intersection. Pictured: participants in the 2016 event.

Promise of a cool glide down Union Street is in store for attendees of this weekend’s Northern Arizona Monsoon Festival in downtown Prescott.

The event will take place from noon to 6 p.m. Saturday, Aug. 19, on the steep section of Union Street, as well as along the Union/Cortez Street intersection.

In celebration of the community’s monsoon season, the festival will feature a water slide stretching for 675 feet — a length that event organizer Steve Gottlieb says equates to about two football fields.

Fueled by water from a fire hydrant at Union and Marina, the slide will provide wet and slippery rides down the hill, ending at Cortez Street along the courthouse plaza.

Along with the slide, the event also will feature: live music by The Black Moods; a tiki bar serving beer, margaritas, and mai tais (for 21 and older); and a number of food vendors. Among the refreshment choices: Hawaiian food, pizza, samosas, and shaved ice and lemonade.

Gottlieb notes that the slide activity will be split into three timeslots – noon to 2 p.m.; 2 to 4 p.m.; and 4 to 6 p.m. For $20, attendees will receive a wristband that will be good for two hours of sliding. Three hundred tickets will be available for each time slot, he added.

While last year’s monsoon festival took place in June, Gottlieb this year’s event was moved to mid-August – in part to take advantage of the slightly cooler monsoon weather.

Other changes will involve a slightly shorter slide length, which will allow the water to flow into the city’s sewer system, where it can be treated, and ultimately recharged back into the aquifer.

In addition, Gottlieb said he plans to give local firefighters and policemen and their families an hour of free sliding time (11 a.m. to noon) before the slide is opened to the public.

Gottlieb’s Eagle Management and Events, LLC is the organizer of the festival, and its website states that the event is presented by Findlay Auto Group. A portion of the proceeds will go to the Boys and Girls Club of Central Arizona.

The slide is open to ages 7 and up, and attendees are encouraged to bring their own inflatables. More information is available online at: http://prescottevents.net/monsoon-festival-aug-19/.