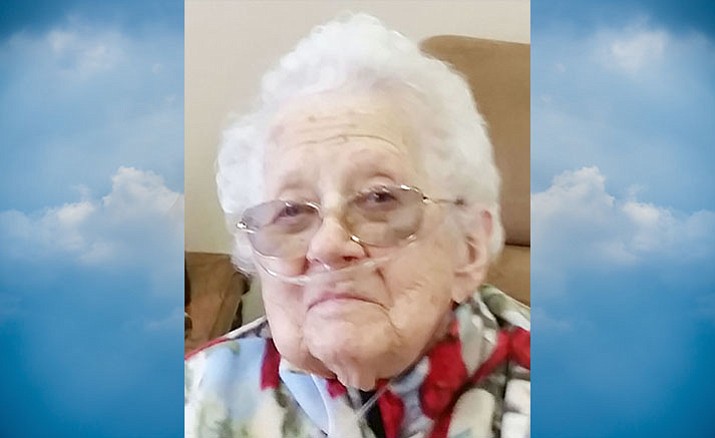 She was preceded in death by her first husband, Leonard Jacobs; her second husband, Emmett Postle; and her only daughter, Linda Dowd. She is survived by her granddaughter, Dawn Klock; her grandson, Jacob Klock; her son-in-law, Sid Dowd; her daughter-in-law, Phyllis Postle; and Phyllis’ children, Curtis Postle and Melinda Postle Thompson. She is also survived by several nieces and nephews and their extended families including many great, great, great, great nieces and nephews.

She was born in Williams, Arizona and spent her early childhood on the homestead in Pittman Valley. She attended grade school in Parks, Arizona, and high school in Williams, where she graduated in 1939.

Doris married Leonard Jacobs and moved to Prescott, where she spent the rest of her life. Her daughter, Linda, was born in Prescott.

Doris’ career was spent as a clerk and stenographer at Fort Whipple. She retired in 1976. Doris and Leonard were also volunteer weather observers for the weather service. Following the death of her husband Leonard, Doris met and married Emmett Postle. She became very close with and is survived by many members of the Postle family. Doris and Emmett loved to travel and took many car trips across the United States. She also visited Finland to meet relatives she has there.

Doris was a member of Prescott Community Church for many years. She was a lifelong Christian and believed immensely in the power of prayer. Doris was an avid gardener and was especially proud of her roses and violets. She was an avid hiker and swimmer. She would swim 100 laps a day at the YMCA pool. She also loved to play bridge.

Doris spent the final years of her life at the Las Fuentes Resort Village, where she became very close with other residents and the staff. In her final year of life she was also under the care of Kindred Hospice. Her tremendous belief in the power of prayer along with the relationships she developed with the Las Fuentes and Kindred staff led to the formulation of a prayer group at Las Fuentes.

Doris had a long and happy life and demonstrated grace and dignity until the very end. A celebration of Doris Postle’s life will be held at the Las Fuentes Assisted Living Resort, 1039 Scott Drive, in Prescott, on Aug. 11, 2017 at 10 a.m.

The service will be followed by internment at the Mountain View Cemetery.