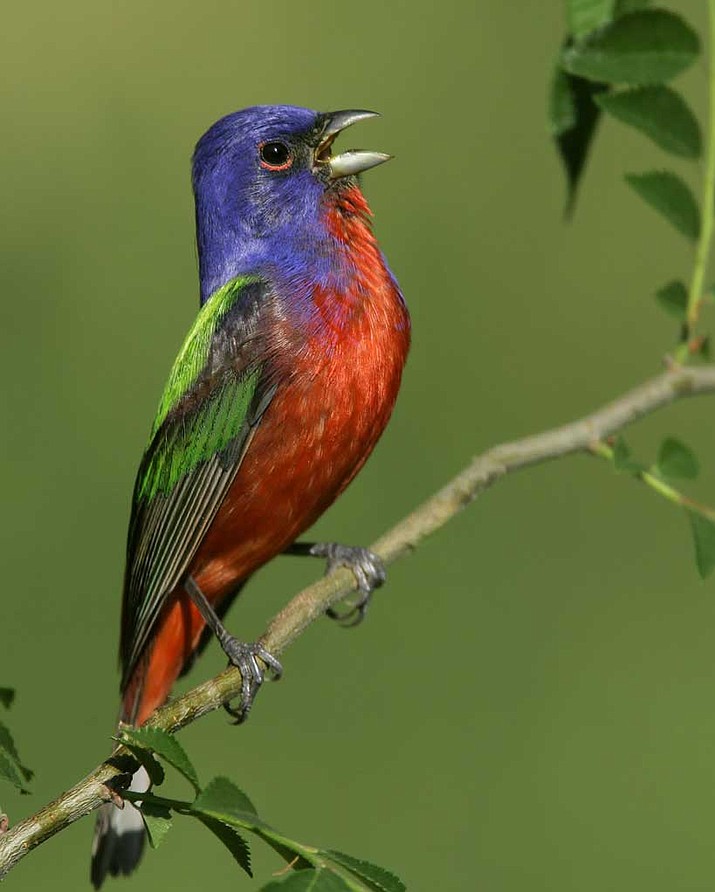 I enjoyed participating in the Sedona Hummingbird Festival this past week, and I am looking forward to seeing a lot of hummingbirds this week at the Southwest Wings Birding and Nature Festival in Sierra Vista.

Each week my wife and I take a walk in Watson Woods. We access the preserve from the trailhead on the east side of Highway 89 where Rosser intersects the highway. From the parking lot we walk the dirt road north to Granite Creek and check to see how it is flowing. This week it was flowing so well there was no way to cross it without getting really wet.

From the trailhead, there is a loop trail that wanders through different parts of the preserve. Recently, as we have been on our walks I have been hearing and seeing several blue grosbeaks and indigo buntings.

Here in the Central Highlands area of Arizona there are a variety of “blue” bird species, but most of them are not bluebirds. Some of the blue birds we see in this area include Woodhouses’ scrub jay (formerly western) and Steller’s jays, blue grosbeaks, lazuli and indigo buntings, and western bluebirds.

Four species of buntings occur in Arizona — lazuli, indigo, painted and varied. Buntings are an example of a family of birds that are actually well-named, as their names are descriptive of their coloration and plumage.

Lazuli buntings are the most common of the four bunting species in Arizona, particularly during spring migration. They love white-proso millet and are fairly common at backyard bird feeders in the spring as they pass through the Prescott area.

Indigo buntings occur primarily in riparian areas with deciduous woods. They are summer residents, and the best place to observe them is in Watson Woods.

Painted buntings are very rare in Arizona. In all my years living in this beautiful state, I have only seen a painted bunting one time! I saw a female at the Rio Salado Habitat Restoration Area. What a thrill! A few years ago, a customer who lives out Williamson Valley had a male at her seed feeder in the spring.

Varied buntings are uncommon in Arizona. The best place to see this species is in southern Arizona where they are a breeding, summer resident. It is likely I will see some this week while I am down in the Sierra Vista area. Unless the male is in direct sunlight, it looks rather dark and unimpressive. However, in the light it is a very uniquely colored bird.

One characteristic all four bunting species share is their ability to sing beautifully. Their songs are distinctive and easily recognizable.

As far as real bluebirds in the Prescott area, the most common species is the western bluebird. It is a year-round resident and is typically more common at the higher elevations in summer (during breeding season) and more common in town during the winter months.

In winter we also get mountain bluebirds. Probably one of the most reliable places to see this species is north of Chino Valley in the area around Sullivan Lake.