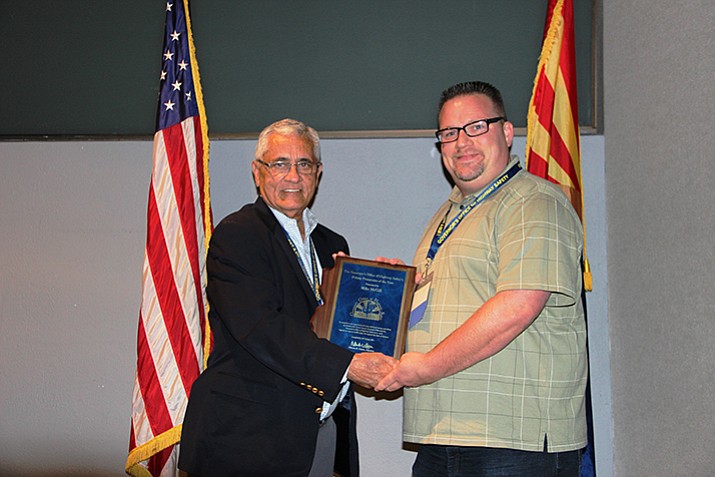 Michael McGill, a deputy Yavapai County attorney, was, on July 28, recognized by the Governor’s Office of Highway Safety as the Outstanding Felony DUI Prosecutor for Arizona. The award was announced by GOHS Director Alberto Gutier at the annual Law Enforcement & Prosecutor’s Conference.

Noting that impaired driving is the second leading cause of death from vehicular crashes in Arizona, Gutier said, “Skilled and dedicated prosecutors such as Mike McGill are essential to keeping our roads safe. Across Arizona we are fortunate to have highly trained officers and prosecutors who understand how to effectively investigate and prosecute impaired drivers to get them off our streets and highways.”

McGill was nominated for the award by Yavapai County Attorney Sheila Polk, who highlighted his successful prosecution of a drug-impaired driver who crashed into another vehicle stopped at a red light in January of 2013.

The defendant, Chris McClain, was traveling nearly 55 mph and never braked. The driver of the other vehicle suffered serious injuries and her daughter, the front seat passenger, was killed.

The 18-month-old granddaughter, restrained in a child safety seat in the back seat, suffered a broken leg.

Evidence collected established that McClain, a medical marijuana cardholder, had impairing amounts of both Lorazepam and marijuana in his system at the time of the collision.

At the conclusion of three weeks of trial, the jury convicted McClain of manslaughter and several counts of aggravated assault, aggravated DUI and criminal damage. McClain had a history of DUI convictions and was sentenced to 32 years in prison.

“Prosecutor McGill is a wonderful credit to our profession statewide. Arizona is a better place thanks to prosecutors like Mike who commit their careers to community safety and to making our state a great place to live,” Polk said.