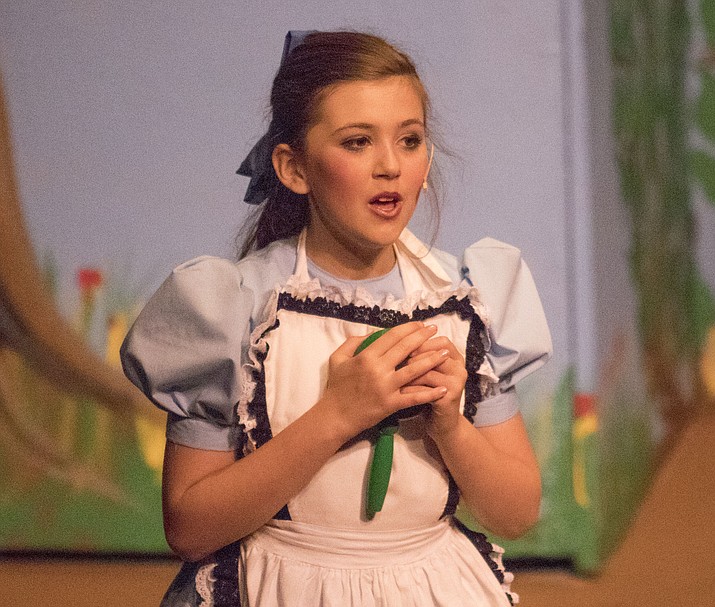 Maybe there is safety in numbers, as in a really big cast of characters. Or just maybe Prescott has oodles of talented, self-confident and stage-savvy kiddos. My money’s on the latter.

The performance began well before the curtain went up on Disney’s “Alice in Wonderland Jr.,” starting its two-week run this weekend as part of the Family Theatre series at downtown’s Prescott Center for the Arts. Knowing the place would be packed with schoolchildren, I thought it prudent to sneak quietly into the theater unnoticed. Nothing doing. A charming and brightly clad Tweedle Dee greeted me at the door. Or was she Tweedle Dum? A formidable Queen of Hearts sat just inside the lobby. And once “safely” seated – in the balcony, no less – I was approached by still more colorful characters from the play. Already I had an inkling the show might exceed my expectations.

Written by Sammy Fain and Bob Hillard, “Alice in Wonderland Jr.” is a condensed 60-minute musical version of Lewis Carroll’s classic tale. Beautifully directed by Deb White, this production has it all, including the full Disney score of musical numbers sung live onstage by the terrific cast.

The fun begins after Alice’s dream takes her down a rabbit hole into a wonderland where nothing makes much sense. Alice soon becomes so frustrated with the illogic of her new circumstances that, like Dorothy in “The Wizard of Oz,” she just wants to go home. But we all know dreams make such goals elusive, and Alice must contend with all manner of strange acquaintances in the meantime.

Three playful Cheshire Cats entertain her until a White Rabbit obsesses over being late while making no apparent effort to get to wherever it is he’s going. The Tweedles Dum and Dee can’t decide who’s who. The very floral Ladies of the Golden Afternoon bar Alice from their exclusive clique while performing a fabulous song and dance number. The Mad Hatter draws Alice into his game, but doesn’t play fair, and neither does a rather nasty (but smashingly attired) Queen of Hearts. Alice’s saving grace is the Caterpillar, a street-smart fairy godmother of sorts.

The children in the audience laughed and sat wide-eyed, their attention rapt. The play’s subtle messages no doubt went unnoticed – lessons in decency, bullying, even vocabulary!

Solo parts were assertively sung by obviously well-trained voices. Costumes by Janice Shanks, Lori Brinkerhoff and Jeannen Calvin are to die for.

No child in Prescott (who isn’t performing in the show) should miss this wonderful production.

Evening performances are Thursdays, Fridays and Saturdays at 7 p.m.; matinee performances are Sundays at 2 p.m. Tickets for all performances, all ages, are $12. For tickets visit the box office in the Gallery, or call 928-445-3286, or purchase online at the PCA website: pca-az.net.