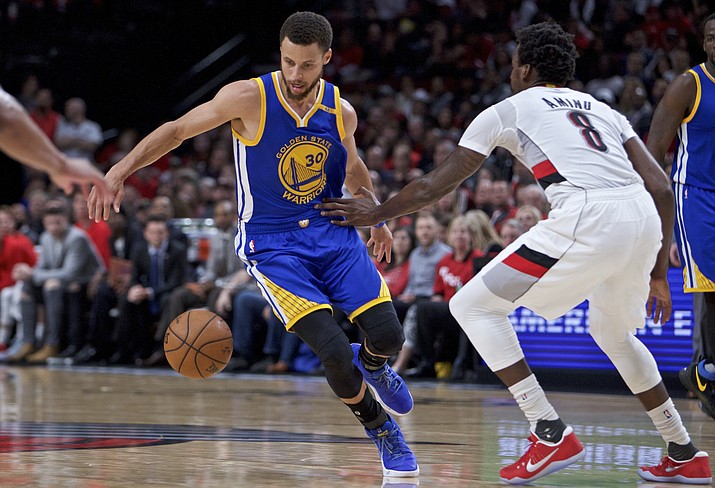 PORTLAND, Ore. — Stephen Curry had 37 points before sitting out the final quarter and the Golden State Warriors welcomed back teammate Kevin Durant with a 128-103 victory over the Portland Trail Blazers on Monday night to sweep their first-round playoff series.

The Warriors advanced to the conference semifinals, where they’ll face the winner of the series between the Utah Jazz and the Los Angeles Clippers, which is tied at 2.

Golden State played for the second straight game without coach Steve Kerr, who has been experiencing a flare-up of symptoms stemming from back surgery a couple of years ago. Assistant Mike Brown has served as head coach in Kerr’s absence.

Durant hadn’t played since Game 1 because of a strained left calf. He started and the Warriors built a 72-48 lead by the end of the opening half.

Golden State pushed the margin to 33 points in the second half. Curry swished a 31-foot 3-pointer that made it 104-77 late in the third quarter and the Blazers couldn’t catch up.

Durant finished with 10 points in 21 minutes. All of Golden State’s starters were in double figures.

Damian Lillard scored 34 points for the Blazers, who were making their fourth straight appearance in the playoffs. The Warriors jumped out to a 14-0 lead at the start. Durant’s dunk extended the lead to 22-3 and the rout was on. JaVale McGee made a highlight-reel alley-oop dunk in route to a 45-22 lead after the opening quarter.

ATLANTA — Paul Millsap bounced back from a sluggish start to score 19 points, Dwight Howard had his best game of the postseason and Atlanta pulled away from Washington to even the opening-round playoff series at 2-all.

Howard, who was a non-factor through the first three games, had a double-double by halftime and finished with 16 points and 15 rebounds. The Hawks got double-figure scoring from seven players, including huge contributions off the bench from Kent Bazemore and Jose Calderon.

Bradley Beal scored 32 points, bouncing back from a dismal performance in Game 3, and John Wall had another stellar performance with 22 points and 10 assists.

But those two, as good as they were, couldn’t match a more balanced approach by the Hawks.

Now, a series marked by ill feelings that went so far as Markieff Morris calling Millsap “a crybaby” is down to a best-of-three. Game 5 is Wednesday night in Washington.

Serge Ibaka scored 19 points and DeMar DeRozan had 18 for the Raptors, who can advance to face defending champion Cleveland in the second round with a victory in Game 6 at Milwaukee on Thursday night. Many in the sellout crowd of 20,251 rose to their feet and chanted ‘Raps in six’ in the final minute of the game.

Toronto lost Game 6 on the road at Indiana in the first round and at Miami in the second round last year, rebounding to win Game 7 at home each time. They were eliminated in six games in the Eastern Conference Final against the Cavs, losing at home in the clincher.

DeMarre Carroll scored 12 points as all five Raptors starters reached double figures. Cory Joseph had 10 points off the bench for Toronto. Giannis Antetokounmpo led the Bucks with 30 points and nine rebounds while Malcolm Brogdon scored 19 points and Greg Monroe had 11. Milwaukee has lost back-to-back games after routing Toronto 104-77 in Game 3.