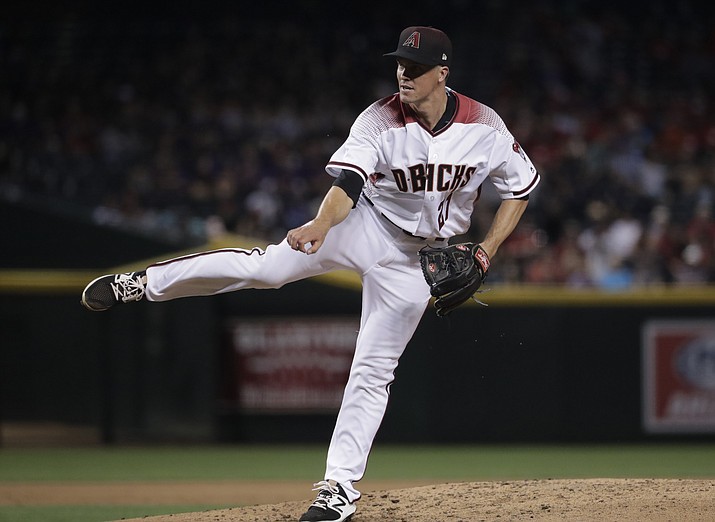 David Peralta homered and singled twice for the Diamondbacks, whose 9-2 start at home ties the best in club history.

Greinke (2-2) gave up a run on six hits, including three singles by Yangervis Solarte, with no walks and left with a 6-1 lead.

Fernando Rodney pitched a scoreless ninth for his sixth save in six tries.

Jhoulys Chacin (1-0), the winner in a 1-0 Padres victory over Greinke and Arizona last Thursday, gave up seven runs and eight hits over six innings.

Wil Myers and Austin Hedges homered for San Diego to make it a one-run game.

Myers hit a three-run homer in San Diego’s four-run seventh against Silvino Bracho, who was just called up from Triple-A Reno, to cut the Arizona lead to 7-5.

Hedges’ sixth home run in his last eight games, against Jorge De La Rosa leading off the eighth, made it 7-6.

Chacin retired the first two batters in the fifth inning before Greinke singled. A.J. Pollock walked and Peralta singled to load the bases. Owings, batting third with Paul Goldschmidt getting the night off, sent the first pitch onto the overhang above the 413-foot sign in left-center to make it 6-0.

Greinke pitched five scoreless innings before giving one up in the sixth, when Solarte came home on Austin Hedges’ sacrifice fly.

Bracho retired only one batter before Myers lined one well over the bullpen down the left field line. Myers’ fifth home run of the season cut Arizona’s lead to 7-5.

Peralta gave Greinke a quick 1-0 lead, his solo shot on the first pitch just clearing the wall in left field in the first inning.

Attendance was announced at 14,758. The smallest home crowd in franchise history was 14,110.

Padres: San Diego placed OF Travis Jankowski on the 10-day DL with a bruised bone in his right foot. Jankowski was hurt when he fouled a ball off the foot in Atlanta on April 14 and his attempt to play through the injury was unsuccessful. Manager Andy Green said Jankowski would be in a walking boot for a few days and there was no timetable for his return. OF Jabari Blash was recalled from Triple-A El Paso and was in the lineup Monday night.