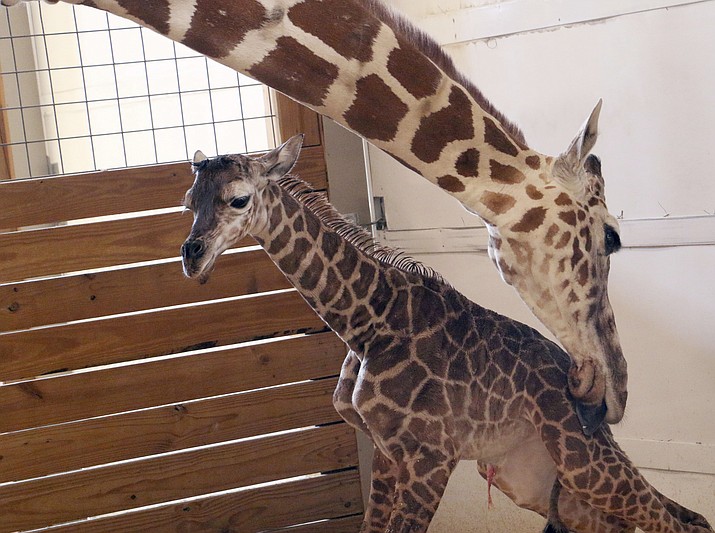 In this April 15, 2017, file photo, provided by Animal Adventure Park in Binghamton, N.Y., a giraffe named April licks her new calf. The baby's birth was broadcast to an online audience with more than a million viewers. Owners of the animal park won’t say exactly how much profit they’ve pulled in from all April-related ventures, but internet marketing experts conservatively estimate the haul in the hundreds of thousands of dollars.

News was pretty strange last week. From airplanes to a certain giraffe, it was a lot to absorb.

Congratulations, April! You finally had your baby and now the entire world can breathe a collective sigh of relief. Yes, after weeks of suspense, over a million folks were able to watch April, the giraffe, give birth on live-stream at the Animal Adventure Park in Harpursville, New York. Hey, it was a little scary there for a while. Her calf’s front legs popped out early the morning of delivery and poor April was walking around with legs dangling out of her! Ouch!

April had been pregnant for 16 long months and in frightening video, we can see the newborn calf crashing about six feet to the ground. No worries, this “fall” from mother breaks the amniotic sac, severs the umbilical cord and the shock encourages the new baby to take a gasp of air. The “baby” is a handsome male, standing almost six feet tall. April and baby boy are a beautiful reminder of all that is good in the world.

Want to fly the friendly skies? Yes, just when we thought air travel couldn’t get any worse, we were able to witness an actual mugging, as a 69-year-old physician was dragged off a plane to make room for crew members. Is this where economy (not as in economy class — but money) meets with reality? Hey, it is never good to punch a paying passenger as you are dragging him down the aisle screaming, on a completely full airplane. People have cellphones and can take videos! We passengers don’t have many rights, but we can post those videos and cause the airline’s stocks to drop a staggering 4.3 percent or 1.4 billion in one day.

And if that whole incident is not horrific enough, perhaps the airline should blame the passenger! Okay, then backpedal and try to give a better apology when you realize that the maelstrom of outrage is global and people have had enough! Maybe we, the customers, have become a nuisance? I mean, hasn’t there been a concerted effort to shorten leg room, make seats smaller (while the population is getting larger — and fatter) wait lines longer and create all manner of suffering at an airport?

Okay, so I have a pilot friend, who likes to point out that airfare is cheap and air travel is very safe. Planes are clean and efficient. You get your own little television and internet connection on the seat back in front of you (of course, you must pay). Most people get their luggage arriving when and where they do and can get across country in five hours. What’s there not to love? Oh I see the “point” in this argument. But just sit in coach for five hours and try to find the love.

Pregnant? Flying? Both are a hassle, scary, unbelievable experiences ... but, oh so rewarding. Especially if your baby giraffe “lands” on the ground safely, and your plane does too! Be careful, Dear Readers, it’s a jungle out there.

Judy Bluhm is a writer and a local Realtor. Have a comment or a story? Email Judy at judy@judybluhm.com.