Search for missing hikers in Grand Canyon being scaled back 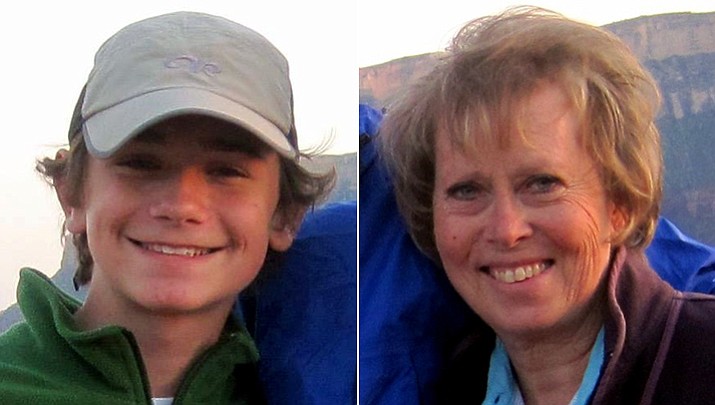 Photos courtesy of the Merrell and Standefer Families

The search for 14-year-old Jackson Standefer and his stepgrandmother, 62-year-old LouAnn Merrell, is being called back, according to officials at the National Park Service. The hikers have been missing since late Saturday when they lost their footing while crossing a stream in a remote area of the Grand Canyon.

GRAND CANYON NATIONAL PARK, Ariz. (AP) — The search in Grand Canyon National Park for two missing hikers swept down a stream is being scaled back, a park spokeswoman said Thursday.

Park spokeswoman Robin Martin said the search for 62-year-old LouAnn Merrell and her 14-year-old stepgrandson, Jackson Standefer, would continue Thursday with use of a helicopter, drone and motorized inflatable raft.

However, the searchers on the ground won't be used because they've now checked areas that they can reach on foot, Martin said.

The hikers have been missing since late Saturday when they lost their footing while crossing a stream in a remote area of the Grand Canyon.

A statement released by the hikers' families thanked the searchers and said the families "are still praying for a miracle in Grand Canyon National Park" but support the decision to scale back the search.

"After carefully considering all the information available to us, and based on our personal knowledge of the search area, we support Grand Canyon National Park's ... decision to scale back the search," the statement said.

Both hikers are related to Randy Merrell, the co-founder of the Merrell Boot Co., a popular outdoor footwear maker.

LouAnn Merrell, the wife of Randy Merrell, was with her husband, stepgrandson and the boy's mother on a multi-day hike when she and the boy lost footing while crossing Tapeats Creek and were swept away by water.

LouAnn Merrell has been previously referred to as Lou-Ann, which is how she identifies on her Facebook page, but a spokesman for the families of both hikers said it is spelled without a hyphen.

The Grand Canyon is consistently one of the most popular attractions in the United States, drawing nearly 6 million people last year.

But the park's nearly 2,000 square miles, steep cliffs and mesmerizing views have often led to accidents and deaths.

The park service reported over 1,000 medical emergencies, 15 deaths and 318 search and rescue incidents in 2015, the last readily available data.

The remote area where the family was hiking is at the bottom of the canyon near the North Rim, a much-less visited area of the park.

This morning the Merrell and Standefer families are still praying for a miracle in Grand Canyon National Park. Today, April 20, the search for Lou Ann Merrell and Jackson Standefer will continue on a limited basis. After carefully considering all the information available to us, and based on our personal knowledge of the search area, we support Grand Canyon National Park's (GCNP) decision to scale back the search.

We thank the GCNP staff for their exemplary service. We know they have done everything possible since Saturday, April 15, to find Lou Ann and Jackson. We also know countless people were praying for a much different outcome than this one. We felt your prayers and were sustained by them in ways we cannot begin to describe. We are profoundly grateful for the support that continues to pour in from across the country.

We thank GCNP, the Arizona Department of Public Safety, Uintah County (Utah) search and rescue, Merrell Boot Co., SKYTEC of Chattanooga, TN, Xanterra Hospitality, and all others who volunteered their time, talents and equipment in the effort to find Lou Ann and Jackson.

GCNP is expected to release information about the search effort. Please direct all search related questions to GCNP.

We ask that you please continue to pray for our families, as our loved ones are still missing, and please respect our privacy at this time.

The Merrell and Standefer families