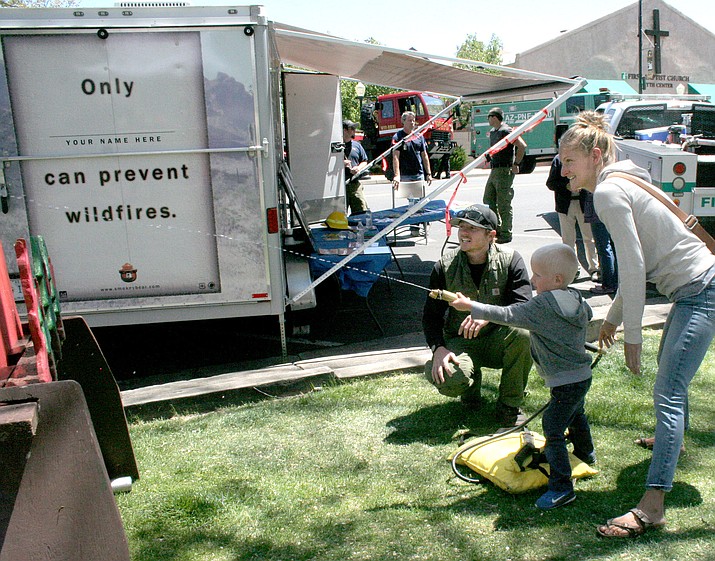 Earth Day, a celebratory and educational event all about environmental protection, takes on a new venue this year, as well as some new features, say event organizers.

The event, scheduled from 10 a.m. to 3 p.m. Saturday, April 22, will take place on Cortez Street, adjacent to the Yavapai County Courthouse Plaza, (between Gurley and Goodwin streets) rather than the plaza itself.

“This is great because it will be a better grouping of exhibitors, which will give attendees more opportunity for interaction with the exhibitors,” Gary Worob, Earth Day Coordinator and Treasurer for the event organizer Open Space Alliance, said in a news release.

Earth Day began 47 years ago, in 1970, when students at 2,000 colleges and universities, public schools and hundreds of communities celebrated the first event – about 20 million Americans participated. Today, about a billion people celebrate from all over the world.

April 22 is a day of action, as well as celebration, in the Prescott area. Many volunteers begin the day in what has become a rite-of-spring event in Prescott hosted by the Prescott Creeks organization.

Now in its 11th year under Prescott Creeks’ leadership, the cleanup has resulted in 43 tons of trash and debris being removed from the Prescott waterways, trails, and natural areas.

As cleanup participation continues to grow, Prescott Creeks is expanding its offerings to include a variety of beautification and restoration activities.

This year, not only will volunteers be able to pick up trash along Granite Creek and its tributary streams, as they have in the past, but they will also be able to choose a number of other environmentally beneficial tasks.

The cleanup’s website (https://prescottcreeks.org/programs/education-and-outreach/granite-creek-cleanup/) breaks down the various projects.

Online signup is available for the specific tasks and locations. (https://prescottcreeks.org/volunteer-event-signup/). The cleanup will take place from 9 a.m. to noon, Saturday, April 22. Signup also will be available at A.C. Williams Granite Creek Park, 554 Sixth St., Prescott.

Overall, the downtown Earth Day event will include 32 booths “full of learning experiences representing solutions for a better environment,” the news release stated.

The lineup will include educational booths on water, solar, food, and fun features such as the Highland Center’s Discovery Trail. The event also will delve into topics such as environment/climate change, with booths by organizations such as CWAG (Citizens Water Advisory Group), and the Sierra Club.

Another focus of this year’s event will be collaboration with businesses on Cortez Street. The news release stresses that the event would not offer food booths that would compete with local businesses.

“There already are three great restaurants on Cortez – Bill’s Pizza, one of the top pizza parlors in the country; Marino’s Mob Burgers and Ice Cream, our great hamburger restaurant; and Tara Thai, which will have a booth on street with finger foods, and fine dining inside,” the release stated.

Likewise, the event also will not have competing booths for arts and gifts. ‘Tis Gallery will be featuring its Earth Day presentation with “found objects,” and local photography artist Pat Warwick will be presenting the wonders of the area.

Other topics featured at the Earth Day event will include: birding, biking, geology, and good food practices.

The Prescott Indivisible Environment Team encourages people to show their support for environmental and climate change protections; public lands; and the value of science in society.

The March for Science, beginning at 3 p.m. on the north side of the courthouse, is a sister event to the one taking place in Washington, D.C., and other communities nationwide on April 22. At the capitol, a gathering of scientists and science lovers will take part in presentations on creeks, bees, climate, sustainable foods, wildlife protection, and government accountability in a series of “teach-ins.”

State-of-the-art firefighting equipment, along with antique fire engines, attracts children of all ages. Activities like the mini-firehose that puts out “flames” painted on a wooden display will appeal to youngsters.

Valuable information on staying safe in case of a wildfire will be available. People can access knowledgeable people and great handouts and items that teach children about fire safety and wilderness survival.

Members of different Firewise Communities will show before and after photographs of how property owners can reduce wildfire fuel from around their homes. Prescott Area Wildland Urban Interface Commission (PAWUIC) members welcome questions about mitigation efforts and offer free brochures on the subject.

The Cache In Trash Out (CITO) group hosts a clean-up and geocache event from 8:30 to 10 a.m. in the Lynx Lake Recreation Area and along Walker Road. For more information, visit geocaching.com and search for Prescott, AZ.

People’s Climate March — This March takes place a week later, at 9:30 a.m. Saturday, April 29, on the north side of the courthouse. Marchers are encouraged to support climate, jobs, and justice for people, communities and the planet.