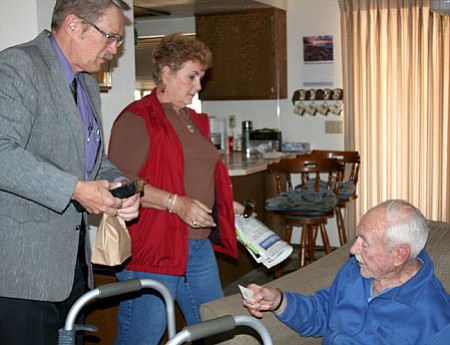 PV Mayor Harvey Skoog, left, and Meals on Wheels driver Teddi Lewis deliver a hot lunch and the Tribune to meals recipient Carl, who also gets a business card from Skoog and an invitation to give the mayor a call anytime. Skoog rode along with a MOW driver on March 24.<br> Trib Photo/Sue Tone

“A lot of my job is to be in DC and do advocacy for the four county area and Trump’s budget is a no-go, but at the same time, we need to continue beating the drum and make sure that we don’t get the cuts that might be coming,” she said, commenting that Prescott Valley’s Meals on Wheels doesn’t receive any Community Development Block Grant (CDBG) money, but Prescott’s does meaning that it will be the most affected. “The majority of our funding comes from the Older Americans Act, which is also up for grabs right now. So that’s the big story, is the Older Americans Act has to be funded at the levels that it passed … Locally our CDBG money is divided by county and it’s rotated. Each county uses it for infrastructure, operations, but not for actual services. Most of it is not used for services. The City of Prescott does choose to give Prescott Meals on Wheels. $12,000 a year for Meals on Wheels, but every time a senior center needs help modernizing their building, buying new refrigerators, expanding their operations, all that money comes from CDBG.”

Beals-Luedtka said she’s on a new national board focused on nutrition and mentioned that Arizona is 15th from the bottom in malnutrition and food insecurity. Meals on Wheels plays a huge part in making sure clients get at least a third of the required daily nutrients a day either through the organization’s services of if the person goes to a congregant meal site, she said. If the person doesn’t get the proper nutrition and Meals on Wheels doesn’t get it to their homes when that person can’t get out, there’s trouble, Beals-Luedtka said.

As a whole though, CDBG is only a piece of that puzzle with the big part of Meals on Wheels funding in Prescott Valley coming from local contributions, support from cities, towns and the county and the Older Americans Act that comes through the Area Agency on Aging, Beals-Luedtka said.

“The Area Agency on Aging is just a piece of the puzzle. We’re really the overarching planning organization,” she said. “Right now, we’re in the middle of an RFP deciding who are going to be our providers for the next four years. That will be announced in June.”

Prescott Valley Meals on Wheels would continue to be funded and running without CDBG dollars, Beals-Luedtka said. However, loss of that money would have a big impact on the towns themselves as they use the funds to build infrastructure such as fire stations and schools. It’s a critical funding source as Northern Arizona is rural and since it’s intrinsically connected with Meals on Wheels, it will affect the organization in the long run, she said.

Being on the hill last week and talking with both Republicans and Democrats, Beals-Luedtka said she was told from both parties that the budget proposal is dead in the water, but that her concern politically is that the entire budget sends a poor message to congress.

“It sends a dangerous message,” she said, remarking that congress is looking to take small discretionary programs and cut them to balance the budget. Aging has such a small portion on the pie chart that it can’t be seen, Beals-Luedkta said. “We’re going to fight as hard as we can for none of that to be cut.”

Another program that with proposed funding cuts includes the State Health Insurance Program (SHIP), funded by the Center for Medicare and Medicaid Services (CMS), which puts $600,000 back into the pockets of seniors, she said, mentioning the majority of that is in Yavapai County. The Medicare counseling program is critical because people don’t understand what drug program they’re supposed to be on and the Area Agency on Aging helps them see all the comparisons and which program they should be on, Beals-Luedtka said.

They’re also helping people get on low income subsidies so Medicare copayments and premiums are paid for if a person falls under a certain income bracket, she said, calling it the difference between being able to be on Medicare and Eat. About 411 people are on a wait list, Beals-Luedtka said.

The Senior Community Service Employment Program (SCSEP) and Low Income Home Energy Assistance Program (LIHEAP) are also under consideration, Beals-Luedtka said, stating that the latter is not just about aging, but a large percentage of people using LIHEAP are elders.

So while CDBG isn’t critical to specifically help deliver meals in Prescott Valley, it is critical for the programs connected to delivering meals, she said. There is concern and hope, Beals-Luedtka said.

“I saw bipartisan support on the hill, particularly for the Older Americans Act. What we have going for us is that before the elections, a Republican congress passed the Older Americans Act so now we’re moving into appropriations and we need to push hard for what they voted for to fully appropriate those dollars so that we can serve the clients that we have,” she said, bringing up how the staff taking all the phone calls at the agency look for whatever can be found for those clients. “It’s not just AAA services. It’s about any kind of service we can find. Is the church doing something? Is the community doing something? Are the Boy Scouts doing something? Are the Girl Scouts doing something? How can we work with the vets? How can we work with the VA? We do all of that.”