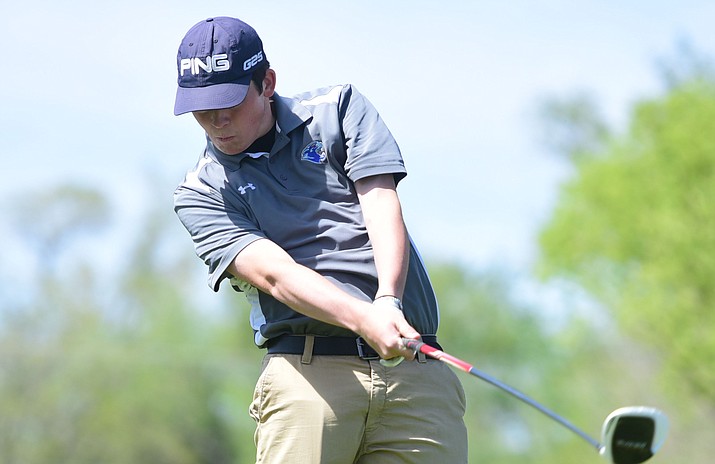 Chino Valley's Wyatt Dodds tees off as the Cougars take on Wickenburg and Northland Prep in golf Wednesday, April 19, at the Antelope Hill Golf Course in Prescott. (Les Stukenberg/Courier)

Chino Valley golfer Wyatt Dodds tees off on hole No. 8 on the south course at Antelope Hills. #CourierSports #PrepGolf pic.twitter.com/A59u9wuDcF

Wyatt Dodds finished with a 17-over par 53, Kylee Rabbe-Mazza shot a 55, but the Chino Valley golf team finished 61 strokes behind first-place Northland Preparatory for third place at Antelope Hills on Wednesday afternoon.

No. 4-ranked Vincent Cortese turned in the best card of the day, shooting a 1-under par 35 on the front nine at Antelope Hills for Northland Preparatory, which had three golfers finish in the Top 5.

Dodds said his 53 was the best round he’s played all season.

“I’m really impressed with that score, it’s my lowest this year,” Dodds said while walking back to the clubhouse to turn in his card, adding his success comes with repetition.

“I’ve played this course enough times where I pretty much know everything about it,” said Dodds, who finished eighth overall. “I was pretty solid throughout, especially driving, so I had a really good day overall.”

“I would say my effort was pretty good with the condition I’m in, but I had some bad holes,” Rabbe-Mazza said.

Other top performances included Simon Trebon, who shot a 4-over par 40, finishing second overall for a Northland Preparatory club that is ranked No. 6 in the state and should challenge for a Division III state title this season.

Justin Hill of Wickenburg was third with a 5-over par 41, while teammate Trey Samsill shot a 42 [+6] for fourth overall. Devon Gussio of Northland Preparatory wrapped up the Top 5 with a 7-over par 43.

First reported by Jose Garcia and azpreps365.com, the AIA has partnered with the Omni Tucson National Resort, which will host Division I, II and III state tournaments beginning next season.

AIA golf tournament director Dean Visser said by partnering with the Omni, the AIA is providing Arizona golf student-athletes with a chance to compete on a top-tier course.

“[It] will be a fair but challenging test of golf,” Visser said.

According to the azpreps365.com, the Division I and II state tournaments will take place at Omni next season from Oct. 23-24 (D-II) and Oct. 30-31 (D-I). A date is not set for the Division III championships.

Chino Valley is scheduled to play at Camp Verde on Monday, April 24, then turn around and play Northland Preparatory in Flagstaff on Tuesday, April 25.

Tee time for both matches was not available at press time.

The Cougars host one of the biggest small-schools golf tournaments of the season on Friday and Saturday, April 28 and 29 at Antelope Hills, with head coach Jerry Behm expecting over 20 clubs for the two-day event.

Brian M. Bergner Jr. is associate sports editor and columnist for The Daily Courier. Follow him on Twitter, Instagram, Periscope and SoundCloud at @SportsWriter52, or on Facebook at @SportsAboveTheFold. Reach him at bbergner@prescottaz.com or 928-445-3333, ext. 1106.