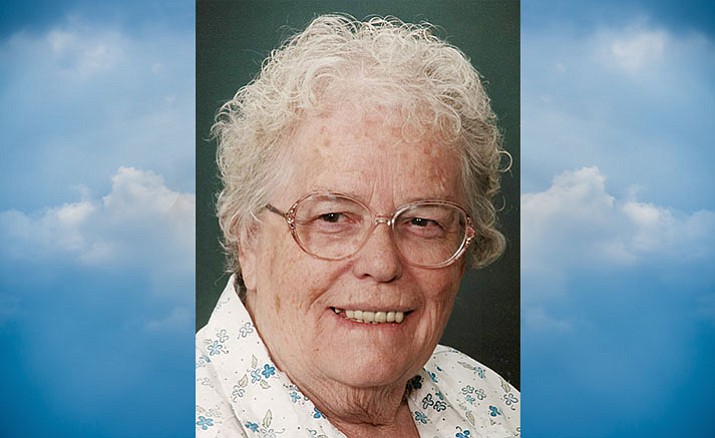 Beth Jones Alger Cothren passed into the arms of our Lord April 1, 2017, while a resident of the Arizona Pioneers’ Home in Prescott. Beth was born Jan. 17, 1928, to Bartlett and Marjorie Jones while her parents were on an extended family visit in Daphne, Alabama. They returned to Prescott with new daughter, Beth, in 1929. Beth has been an Arizona resident since that time.

Shortly after graduating from Prescott High School in 1946, Beth worked as a telephone operator for the former Mountain Bell Telephone and Telegraph Company. In 1947, Beth married Hugh Alger and they had five children. As her family grew in the 1950’s, she became a full-time mom raising her five children during difficult times. Later, Beth was employed by the Cornet Company and became assistant manager for the Prescott store and then promoted to Manager of the Williams, Arizona, Cornet store until her retirement. It was in Williams where she met and married Filo Cothren, a good man, and enjoyed many fun years with him prior to his passing in 1987.

Perhaps Beth’s proudest achievement was as a member of the Women of the Moose Lodge which she joined in 1955. She achieved the level of Graduate Regent in 1957 and was inducted into the Moose College of Regents. She achieved status as a Life Member. Besides raising and caring for her children and grandchildren, Beth’s passion seemed to be sports. Not only was she an active athlete in high school focusing on basketball, softball, and archery, but she became an avid supporter of each of her children and most of her grandchildren in their competitive and intramural athletic endeavors over several decades in Prescott. Beth’s voice could be heard throughout the stands cheering for her kids or grandkids and offering her opinions to the umpires.

Hampton Funeral Home, 240 S. Cortez Street, Prescott, Arizona, has been entrusted with arrangements and a memorial service will be held there, on Saturday, April 22, 2017 at 11:00a.m.