Cody Collett returns to Prescott football, joins staff as tight ends coach
Townsend: ‘He considers himself a Badger and can’t wait to come back’ 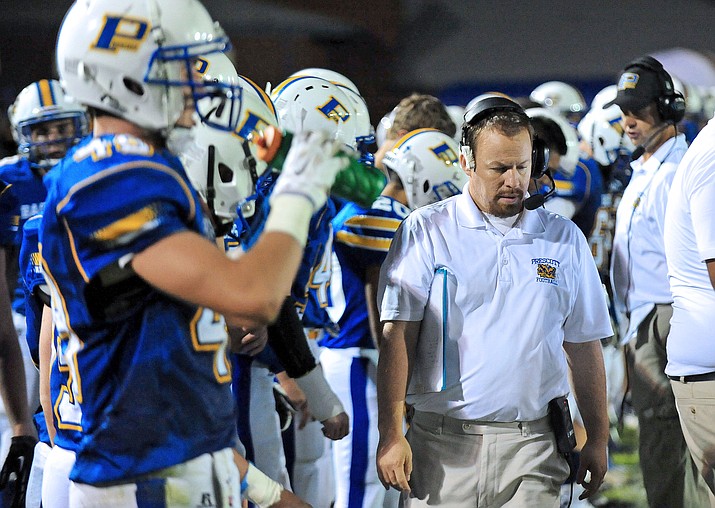 Former Prescott football head coach Cody Collett is rejoining the Badger staff as a tight ends coach under Michael Gilpin after just one season on the job at Poston Butte.

In December 2015, Collett resigned his position at Prescott to take the reins of a San Tan Valley-based Broncos program coming off a winless (0-10) season.

Collett reportedly tendered his resignation from Poston Butte three weeks ago, and was offered a job by the Prescott Unified School District as a physical education teacher, opening the door to his return to the Badger football program.

She stated the football program is “pleased” to welcome Collett back to Prescott for the upcoming 2017 season.

“Coach Collett expressed a desire to return to Prescott, a school he loves and a town that he wants to raise his family in,” Townsend said. “He considers himself a Badger and can’t wait to come back and work with our students in the classroom and our athletes on the field.”

Despite leading Poston Butte to a 4-6 record in 2016, Collett, in tune with Townsend, admitted Prescott was where he wanted to be.

“When I was at Prescott, it was the best place I’ve ever coached. It always felt like home,” Collett said in a phone interview, adding financial situations and a home already owned in Gilbert were big factors in taking the head job at Poston Butte.

But at the end of the day, Collett said, “money isn’t everything.”

“When I was at Prescott, I always figured I’d go back to the Valley, but if I stopped and thought about it, I should have realized the great kids, great people in Prescott,” Collett said. “I’m excited and honored that they’ll take me back.”

Collett spent four seasons pacing the Prescott sidelines amassing a 27-14 overall record. He led the Badgers to only one state playoff appearance during his tenure, which came in his first season as coach in 2012.

Collett posted back-to-back 7-3 campaigns in 2014 and 2015 before leaving for Poston Butte.

Gilpin, who was Collett’s offensive coordinator before his departure, was promoted to head coach in February 2016.

When asked how Collett would fit in with the coaching staff and what the relationship would be between himself and a former boss, who is now his assistant, Gilpin quickly dismissed the thought of it being an issue.

“Cody is a friend of mine. He called me, we started talking about it ... He was really unhappy [at Poston Butte], he’s not here to take my job,” Gilpin said, adding he spent the entire offseason strengthening his coaching staff and Collett makes it even stronger.

“If the goal is to build the strongest program possible, you want the best coaches possible on your staff,” Gilpin said. “I don’t feel threatened by [his presence]. I think this will make us better, and that’s really the point.”

Collett said he has the “utmost respect” for Gilpin.

“I want to help out wherever I can, and do whatever I’m told,” Collett said.