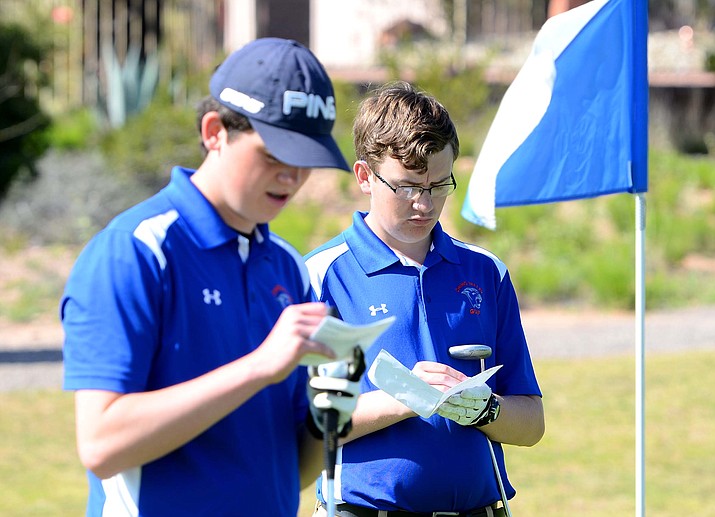 CORNVILLE — Chino Valley golf edged friendly rival Camp Verde on Monday afternoon in a match that came down to the last golfers.

“We played really well for what we’ve got and who we had (Monday),” Chino Valley assistant coach Wade Krug said. “We played a really good match.”

Krug said it was a good match because of how young the Cougars are, who were without their top ranked player senior Rory Stupak (No. 135) and head coach Jerry Behm.

While Chino Valley won four of the five matches, Camp Verde kept it close, each one was three strokes or less.

Senior C.J. Knight shot the lowest score on the day, 51, and edged Camp Verde junior Nick Daniels by a stroke in the No. 1 match.

“Our number one, C.J. Knight, he had a really good match (Monday),” Krug said. “He just came out and played a really good, solid match for himself.”

“I haven’t played this course in a while so it was pretty interesting to play it,” Rabbe-Mazza said.

Cougar junior Wyatt Dodds defeated one of Camp Verde’s veterans Will Webster 59-61 in the No. 3 match.

“It was pretty rough throughout the day but I pulled through on a lot of holes,” Dodds said. “Like I wasn’t doing too well on my driving, my irons, but I was solid on my chipping and putting through, so that kinda balanced it out.”

As they’re both young and Chino Valley is ranked No. 45 in Division III and Camp Verde No. 47, teams seemed like mirror images. Before the match the coaches joked that the CVHS in blue would win as both teams wore royal blue polos.

Chino Valley is in fifth in Section V and Camp Verde sixth. No. 6 Northland Prep and No. 9 Sedona Red Rock are the front runners to win the section’s automatic bid to the state tournament in May.

The 15-team tournament features eight at large teams based on the rankings and the top 15 individual players who are not attached qualify.

“We’re just going out week by week trying to get better,” Krug said. “Our big one is in a couple weeks when we do the High Desert Invitational.”

The Cougars’ next match on April 19 in the Chino Valley Multi, against No. 36 Kingman Academy, No. 6 Northland Prep and No. 13 Wickenburg at 2 p.m.

Rabbe-Mazza said the season has gone pretty well for the Cougars.

“I must say that we’ve all come a long way and I’m proud,” Rabbe-Mazza said.

James Kelley is a sports writer for the Verde Independent in Cottonwood. Follow him on Twitter at @JamesKelley520, or reach him by email at jkelley@verdenews.com.