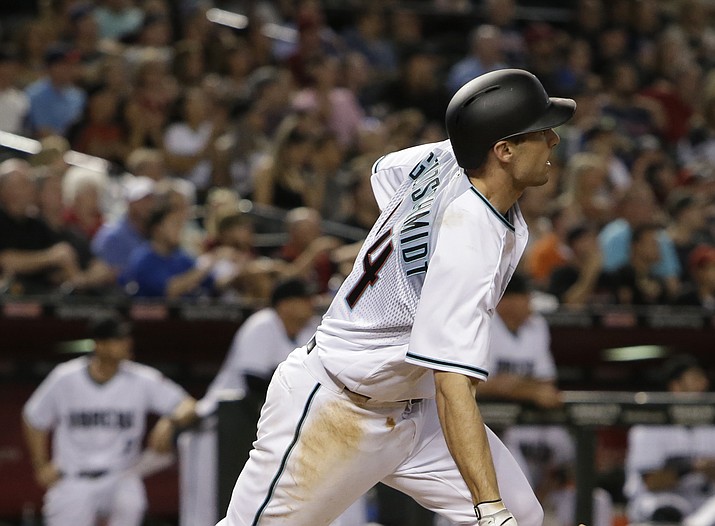 Arizona Diamondbacks first baseman Paul Goldschmidt watches his two-run double in the fifth inning of a baseball game against the Cleveland Indians on Friday in Phoenix. (Rick Scuteri/AP)

PHOENIX — Paul Goldschmidt doubled in two during a five-run fifth inning and the Arizona Diamondbacks rallied from three down to beat the Cleveland Indians 7-3 on Friday night.

The Diamondbacks have come from behind in each of their four victories this season, three of those comebacks from three runs down. The Indians lost their first game after a three-game sweep at Texas earlier in the week.

Arizona got four runs in the fifth off Josh Tomlin (0-1) after a single and hit batter. Tomlin struck out the next two batters, but Goldschmidt lined a double into left-center field to give the Diamondbacks a 4-3 lead over the defending AL champions.

Tomas had two doubles and two RBIs, Drury had two hits and two RBIs and Shelby Miller (1-0) earned the win in his first outing of the season behind 5 1/3 innings. Miller, who struggled to a 3-12 mark last season, struck out seven and walked three while allowing three runs and five hits.

Cleveland led 3-0 after the first two innings. Francisco Lindor hit his third home run in four games in the first, and Carlos Santana drove in two runs with a second-inning single.

Tomlin, a key contributor in the Indians’ run to the World Series last year, was sharp for three innings. Then Arizona scored twice in the fourth before erupting in the fifth.

The right-hander allowed six runs and seven hits while striking out six in 4 2/3 innings.

Tom Wilhelmsen and Randall Delgado turned in 3 2/3 innings of scoreless relief, with Delgado pitching the final two innings for the Diamondbacks.

Arizona has scored 34 runs in five games, two short of the club record set in 2005 through the first five.

Indians 3B Yandy Diaz charged and barehanded a slow bouncer and threw out Tomas at first base in the second inning.

Drury extended his hitting streak to nine games, going back to the end of the 2016 season, with an infield single in the second inning.

Indians: IF Jason Kipnis (right shoulder inflammation) is headed to Double-A Akron to play as designated hitter and at second base Sunday and Monday before any decision on when he’ll be activated from the 10-day disabled list.

Indians: RHP Trevor Bauer faces his former team, the Diamondbacks, for his first start of 2017.

Diamondbacks: Zack Greinke looks for his first win of 2017 in his second start of the season. Greinke is 9-9 with a 3.87 ERA in his career against Cleveland.