Proposals sought for Hotshot memorial
Deadline is set for June 15 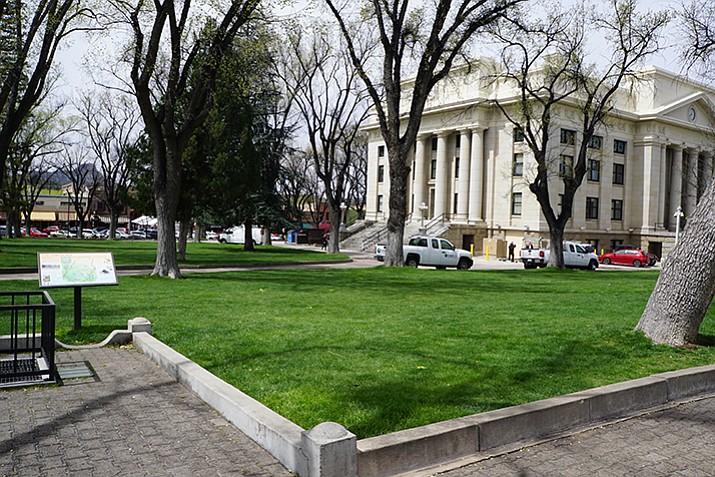 A Cortez Street location on the Yavapai County Courthouse Plaza was earlier set aside for a memorial to the 19 fallen Granite Mountain Hotshots. After soliciting ideas from the public in 2016, the memorial committee has now moved on to the request-for-proposal phase. The deadline for proposals from artists is set for June 15, 2017. 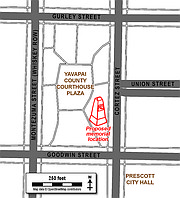 The mission is clear: To create a lasting memorial to the 19 fallen Granite Mountain Hotshots.

The location is set: A high-profile spot on the Yavapai County Courthouse Plaza along Cortez Street.

Now, as the four-year mark of the June 2013 tragedy approaches, one central question remains: What will the memorial look like?

Bruce Martinez, chairman of the Granite Mountain Hotshots Memorial Partnership, says the 10-member group working on the project will take another step toward answering that question this summer.

Several weeks ago, a request for proposal (RFP) was sent out to dozens of qualified artists all over the country, Martinez said. Those interested are being asked to submit their proposals by June 15, 2017.

The RFP offers a number of suggestions and guidelines. For instance, the document includes a list of community wishes, which were solicited through a public-comment period. The RFP notes that the community suggestions “may be considered for integration into the overall memorial.”

• The story of the June 30, 2013 tragedy, including the Hotshots’ motto, Esse Quam Videri (“To be, rather than to seem”), as well as the names and biographical information of the fallen Hotshots.

• Elements such as incorporation of bronze and/or granite, along with the ability to physically and emotionally touch/feel/connect with the memorial.

• Symbols such as the historic alligator juniper tree on Granite Mountain, which the Hotshots saved during the June 2013 Doce Fire; a silhouette of Granite Mountain; wildland firefighter hand-carried equipment (boots, helmet); the importance of the No. 19; and an etching of the “pyramid” photo taken by crew Superintendent Eric Marsh on Granite Mountain.

The memorial must be architecturally and aesthetically compatible with the Yavapai County Courthouse, the RFP added, and it must be made of materials that will age well.

Artists are being asked to submit their qualifications, relevant project experience, a narrative description of the proposed memorial; and additional illustrations.

A selection committee will review all of the proposals and select semifinalists, based on: artistic merit; appropriateness of design concept (scale, form, content, and materials); appropriateness for climate and site; ease of maintenance and safety; and demonstrated ability to complete the project with the project schedule and resources.

The chosen semifinalists will then be asked to do further design work, such as a site-specific design, a three-dimensional scale model, an implementation schedule, and a project narrative.

The committee announced the launch of its website (www.gmhsmemorial.com) in the winter of 2016, and asked for community ideas that February.

The public-comment period, which ended just prior to the three-year mark of the June 30, 2013, Yarnell Hill wildfire, produced more than 40 comments. That set the stage for the development of the RFP, Martinez said, noting, “We wanted a consensus of what the community wanted, and we put that in the RFP.”

Martinez, a retired Prescott Fire Chief who was asked by the Prescott Fire Department to help field the calls that were flooding in with memorial ideas after the tragedy, has noted that he was advised by a member of the Sept. 11 memorial in New York City not to rush the process.

“We said we would take our time from the very beginning, and that’s what we’re doing,” he said.

The entire RPF is available online at: https://www.gmhsmemorial.com/wp-content/uploads/2014/09/RFP.pdf