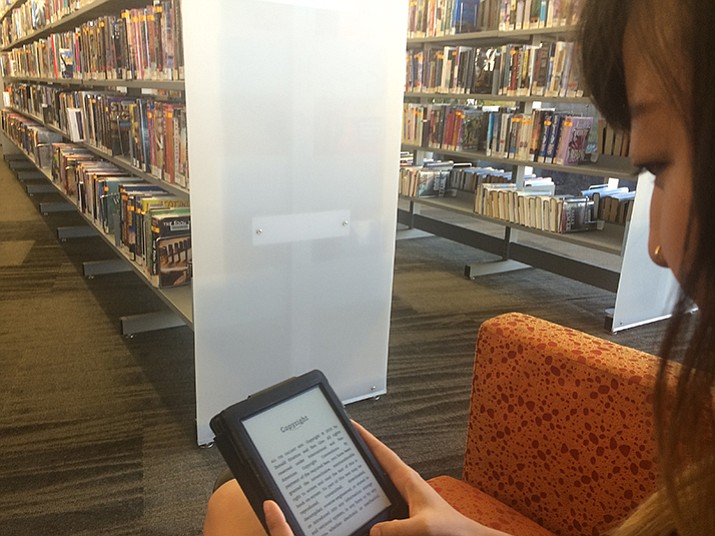 There always seems to be a misconception that libraries are old and nothing new happens there, said Prescott Valley Public Library Adult Services Librarian Jennifer Kim. However, all the librarians read about what other librarians are doing and working to see if their efforts are good for Prescott Valley’s library, she said.

As such, the Prescott Valley Public Library is more than just books and has a wide array of digital offerings, from the Digital Media Lab and PC Lab to preloaded Kindles and coding clubs. The Digital Media Lab started out as a virtual reality room that was never used, said Library Supervisor Casey Van Haren. As such, Van Haren said she wrote a grant to have the lab which included Mac computers, recording equipment, cameras and a green screen and more has been added on to that, such as the 3D printer the library recently got from a grant that went towards a 3D printing class on Monday. Additional items were purchased that can be used in the lab for Maker Space as well, said Teen Librarian Shelbie Marks.

“There are drawing pads so you can make digital artwork, just like if you were drawing on a piece of paper, we have some keyboards for music recording, we have a couple robots,” she said, “the Makey Makey which is like a thing for circuits, 3D printing pens which are pretty cool and then we’ve incorporated the 3D printer a little bit.”

A local small business can go into the Digital Media Lab and tape a small commercial and all that’s needed is a library card, said Adult Services Library Assistant Carol Swenson.

The library has had preloaded kindles for about three years now, said Adult Services Librarian Michele Hjorting. Patrons can check them out and the library tries to get the new best-selling high demand titles for them, she said, calling them very popular.

There’s OverDrive as well, which Swenson said she encourages patrons to check out even if they think they aren’t going to like eBooks. Anyone with a tablet or a computer can read books or listen to audiobooks on those devices, she said.

“Most of the time, when I do the OverDrive classes, the people are generally like 45 or up that come to the classes and some of them are like my mother who’s 83,” Swenson said. “It’s very user friendly and there’s a lot of variety there.”

“We are information professionals, Van Haren said. “We don’t necessarily know it all, but we know how to find it.”

Those interested in coding can join the library’s coding clubs, too. Thursdays is when the Kids Code Club is while Teen Code Club is on Fridays. There’s an adult code club coming in July, Hjorting said, also mentioning Zinio, a program offering electronic magazines.

On top of all of this is the PC Lab, which holds 25 computers, Van Haren said, stating it’s where the library holds all of its computer classes. People can also come in from noon to 1 p.m. Wednesdays through Fridays to work in the open lab and its where the business classes are every Tuesday, she said.

“It’s great, we use it for everything. Our whole Oasis grant classes that Michele has put together has been in the PC Lab and our Peak Business Experience Hub has a giant 80-inch smart TV that we currently use for the grant for the business hub,” Van Haren said. “The Yavapai Regional Economic Development Center uses that every Tuesday for all the business classes that we offer, the public uses it from time to time.”

To use the smart TV, a person has to understand computers as it’s a touch screen and is very expensive, she said.

Card Catalogues are out too, Swenson said. In their places are six PCs, three of which are in the first floor by the personal PCs and three are in the non-fiction section, she said.

“I probably, at least a couple times a week, spend 10 minutes with somebody showing them how to go in there because you can filter and you can search for new items by putting in dates and I think a lot of people don’t realize that resource,” Swenson said. “Much more user friendly and it does a lot of the stuff we use dot have to do because when you use a card catalogue, you have to cross reference things. The computer does that for you.”

All of the library’s digital offerings come from grants and this year, the Prescott Valley Public Library wrote a total of five grants, Van Haren said, commenting that the grant for the Digital Media Lab was written when she got to the library in 2012 and Hjorting wrote the cultural event series grant when she arrived and they just kept adding onto those grants.

The grants are provided by the Library Services and Technology Act through the Institute of Museum and Library Services, Van Haren said. Right now, those funds are in jeopardy, she said.

“I’ve written all of my congress members about supporting these funds because if they go away, if the current administration cuts them, then we don’t get these grants,” Van Haren said. “That is a huge disservice to our community. we will not be able to provide the services and the great innovative programs.”

One other distinct challenge with all these digital offerings has been people’s fear of technology, Swenson said, remarking she tells her classes that they shouldn’t be afraid to touch the device because they’r enot going to break it. In fact, she likened the shift in technology to when cassettes overtook eight track tapes in popularity, which she said learning how to make the transition between those two is the same thing as learning to make the transition from books to eBooks.

That all goes into digital literacy, Van Haren said. On one hand, there’s digital natives who grew up with technology and on the other, there’s the older generations who are initially afraid to use it, she said.

“That’s why we’re here,” Van Haren said. “We’re here to help teach them that they can learn the technology. We all learn it in different capacities. We all should still be able to continue to learn no matter what our age is.”

Technology is always changing and there’s always think tank meetings to discuss future grants and where to advance and what technology or future classes should be at the library, Van Haren said, adding she and the others are always looking for cool innovative ways to help the community and that’s something which will never stop.

The next big step is outreach, Van Haren said. She and Kim talked to a realtor group about a month ago, they’ll talk to the Lions Club in April and the library even did outreach a the Sci-Tech Fest at Gateway mall.

“We want to go out into the community and tell them we’re more than a box of books,” she said. “We have all this to offer.”

No matter what though, the library will always have books, Swenson said, mentioning that all the digital offerings are just another avenue for people to get their information.