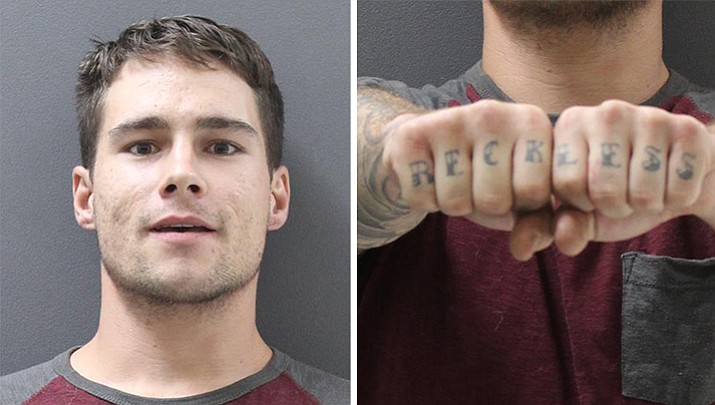 The suspect, 24-year-old Joshua Harrington, is white, 5-feet, 9-inches, with brown hair and hazel eyes. He has a series of letters tattooed on the knuckles of both hands.

A man who robbed his friend and stabbed him during the incident, then took his car, is wanted by the Yavapai County Sheriff’s Office, spokesman Dwight D’Evelyn said.

Joshua Harrington, 24, is alleged to have accused the 35-year-old victim of stealing heroin out of a backpack during an argument at a home in the 5300 block of Diamond Drive on March 30.

The confrontation escalated, and Harrington pulled a large knife from the backpack, raised the knife and threatened to kill the victim, D’Evelyn said.

“To avoid being stabbed, the victim grabbed the knife blade,” D’Evelyn said. “When Harrington pulled the knife downwards, the victim’s hand was cut.”

The victim locked himself in a bathroom, but Harrington forced open the door. Harrington, now joined by a friend, demanded that the victim give him his car keys.

The pair left in the victim’s car, D’Evelyn said.

Prescott Valley Police found the car abandoned the next day.

Harrington is wanted for robbery and vehicle theft.

He’s white, 5-feet, 9-inches, with brown hair and hazel eyes. He has a series of letters tattooed on the knuckles of both hands.