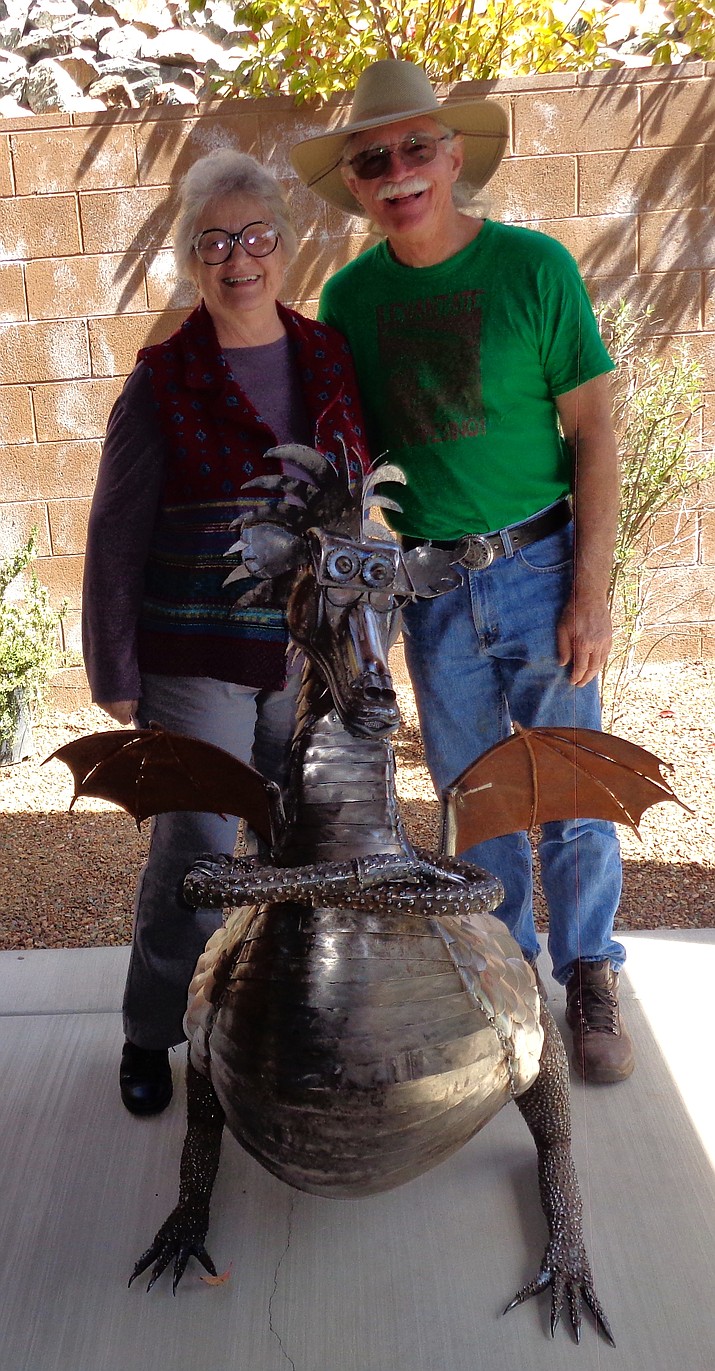 Jean Lutz and Rick Hartner pose with that “something special” dragon.

The arrival was a surprisal when Rick Hartner delivered the fabulously fierce but beautifully bespectacled dragon to Jean Lutz at her Prescott home last month. And the secret was well-kept, as Rick and a trio of “co-conspirators” kept a tight lid on the project, which encompassed more than a year in the making. And what, you might wonder, prompted the largesse? Well, Rick — a metal sculptor maven who resides with his artist wife Rosie in Kirkland, provides the heartwarming answer.

“From my standpoint,” he explained, “I was introduced to Jean about six years ago by a mutual friend who suggested that she could teach me a few things about ceramics, since I wanted to learn how to make my own birdbath bowls. Jean took me into her studio and at no charge taught me the basics about ceramics and how to make bowls.

“In my association with Jean,” he added, “I learned that she was also instrumental in teaching art to groups of homeless people and veterans. And about three years ago — I’m sure just on a whim — she found a picture of a metal dragon on the internet and emailed it to me with the quip, ‘I want one!’ I decided that since she does all of these great things for other people, it was time that her contributions to the community should be recognized. This is probably another example of being careful of what you ask for.”

Rick’s mention of Jean’s selfless teaching of art to the homeless and veterans was described beautifully in a December 2015 feature article written by The Daily Courier’s Nanci Hutson, who told of Jean’s 2010 founding of Everybody’s Place “to teach pottery classes to homeless or at-risk clients at the Open Door, a program of the Coalition for Compassion and Justice. She saw it as a potential antidote to some business owners’ concern about the homeless chasing away their customers.”

Jean’s husband, Ed, noted that she “became intrigued at how talented some of the homeless population are, and her first project was to have the CCJ guests make bowls for ‘Empty Bowls’ as their way to give back to a community that helps them.” In addition, she “held classes at the Margaret Morris Alzheimer Day Care and at the VA and became a mentor to a number of homeless individuals” and in 2015 “put together a successful art show on Iron Springs Road that featured the work of several homeless artists.”

Now, about those aforementioned “co-conspirators”: Rick hoisted a toast — a “dragon flagon” you might say — to the trio who assisted in the project and were present for the unveiling at the Lutz place on March 18. “Royce Carlson made the wings,” he said, “Brad de Vries made the tail, Ron Miller made all of the scales, and I created the general design and did the final construction.”

And the dragon? Well, it’s stationed on Jean and Ed’s back patio and has been christened as “Snort.” (It no doubt breathes love instead of fire.) And regarding the gift, Jean says that she’s “speechless. I had no idea that Rick, in my joking, would make it a reality!” And, to top it all off, she confides that the winged and scaly serpent is “starting to rust beautifully!”