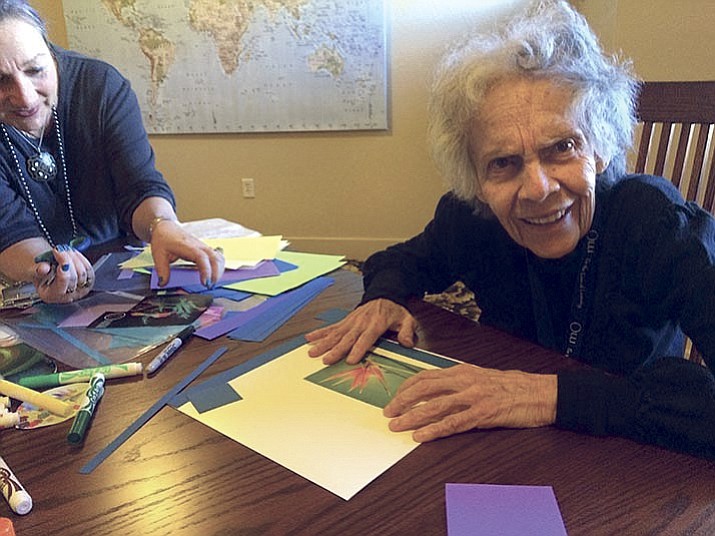 Silvia Herrera is a fireball, a Puerto Rican native who at 84 is an accomplished pianist and retired attorney with an uncanny ability to weave stories of her life such that the listener wants to turn back time.

She still speaks with a Spanish accent, her staccato pace requiring her listeners to pay attention as she offers provocative insights and thoughts on everything from current events to ancient philosophies. The only thing about her that is frail is her body; her memory is keen and her imagination bold.

A Prescott Meals on Wheels client for the last six years, Herrera lives on her own in an independent, congregate senior living complex. She does require a walker, and her arthritis and back pain are now severe enough that playing the grand piano in her living room is nearly impossible. Much of her company comes from community volunteers and friends who appreciate her spunky spirit.

It was all those qualities that made her a perfect candidate for the Creative Aging program, a pilot effort titled “Art on Wheels” initiated by Prescott Meals on Wheels Executive Director Bert Ijams who was able to work with Gary Glazner, founder and chief executive officer of the Alzheimer’s Poetry Project in New York City on this project. The Arizona Commission on the Arts provided a small grant so that the agency could bring art-related programs to 16 of their clients on a first come, first serve basis. The four participating local artists were, Juanita Hull-Carlson, a visual artist and professional sculptor; Meg Borhman, a professional musician, Mary Heller, a choreographer/dance and movement instructor and Francois Maurice who facilitated writing and poetry exercises for the clients.

Ijams said the motto of Meals on Wheels has long been, “More than a Meal,” and this program spoke to that concept. She said many of their clients are “amazing people” with hidden talents that just need to be coaxed and encouraged. She said the goal of the “Arts on Wheels” program was to expose clients to different artist mediums and encourage them to take “creative risks” so they do not get stagnant in their everyday lives.

“We need to be empowering, engaging and lifting people up,” Ijams said.

On the final day of the project, Silvia was treated to a visit from Carlson who brought supplies to teach her how to make a mandala, a Tibetan sacred painting that is composed of squares and circles and small drawings of animals and objects that speak to enlightenment.

But Carlson advised Silvia not to “define it – it’s too complicated.”

Rather Carlson encouraged Silvia to cut-out pictures and orient them so that they had meaning to her.

With stacks of magazines, colored construction paper, markers and other embellishment materials, Carlson offered suggestions, even some mandala coloring books and pages, to give her student of the day ideas. From there, Carlson simply encouraged Silvia to use her imagination to have fun.

“You want to leave room for interpretation,” Carlson advised.

As Silvia used a pair of scissors and glue to shape and place a bright flower center square bordered them with a circle of brain neurons she said liked because it reminded her of her years spent in college to broaden her mind, she burst out with a loud chuckle.

“I’m reverting to my experience,” Silvia said as she cut up magazine pieces and paper. “I cut out a lot of paper dolls in my time.”

For Carlson, this project she embraced from the start was a chance to make new friends of people from another generation. Like Ijams, Carlson has high hopes for expanding this project to more elders.

“I know there are people out there who are just buried alive; ignored by their relatives, and even friends, as they get old and can no longer travel,” said Carlson who has public artwork on display.

She leans over Silvia’s shoulder.

“I expect you to make more,” she said. “It’s a meditation process, just making them.”

“This is fun,” Silvia concluded.