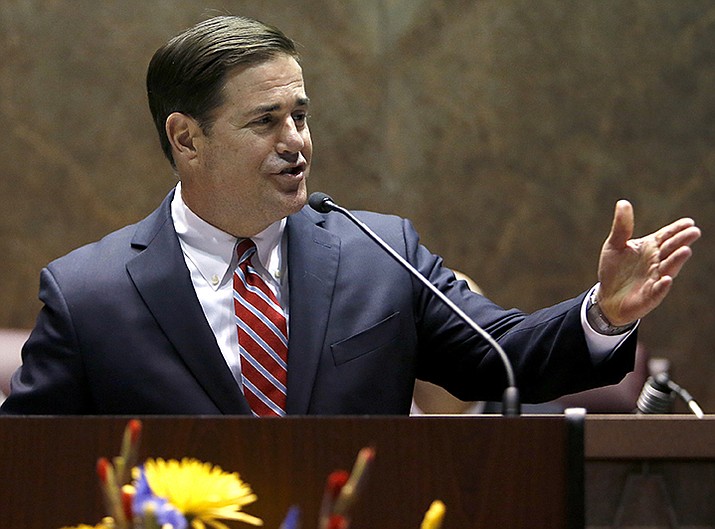 Senate Bill 1367 requires doctors who perform abortions to try to revive fetuses that show any signs of life and to have the needed equipment on hand. It would also require clinics that perform abortions at 20 weeks or more to meet the equipment standards, mandates enhanced reporting and adds definitions of what signs of life require action. An amendment to the bill provides exemptions for fetuses that are diagnosed with a "lethal fetal condition." Doctors would still be required to report those cases. Current law requires doctors to provide lifesaving measures if a fetus is alive.

Supporters say the law will ensure babies who survive abortions are given life-saving care. They cite two cases in Arizona in which abortions resulted in live births but the infants died. Center for Arizona Policy President Cathi Herrod says doctors should treat born-alive cases with the same humane care and concern they would any premature baby. Ducey is an abortion opponent. He made no comment on his action.

Opponents say the measure would cause unnecessary pain to infants born too early to survive or with defects that will lead to their deaths. During committee testimony, neonatologist Dr. Peter Stevenson testified that the current standard of care is not to resuscitate fetuses delivered prior to 22 weeks nationwide.

The House approved the bill Wednesday, the same day a California-based anti-abortion group released a video from October 2014 showing an Arizona doctor who performs abortions discussing procedures for delivering intact fetuses. Herrod's group said the video proved the need for the new legislation. Pro-abortion rights groups said the timing of the video's release was designated to sway lawmakers.

The Legislature regularly passes measures attempting to restrict abortion and abortion-providers. Last year it voted to repeal two laws on abortion previously signed by Ducey, after state attorneys said they appeared to be indefensible in court. The governor later signed another bill making it easier to cut off Medicaid funding to providers that fail to segregate taxpayer money from other funds used to provide abortions.

The Guttmacher Institute, a researcher group that supports abortion rights, says 35 states and the U.S. Congress have enacted laws requiring lifesaving measures for born-alive cases during attempted abortions, with many dating from the 1970s. But none go as far as Arizona's proposed law, said Elizabeth Nash, Guttmacher's senior state issues manager.

PHOENIX -- Gov. Doug Ducey on Friday signed into law what appears to be the most comprehensive restrictions in the country on what doctors have to do if a baby is born alive during an abortion.

Ducey's action came less than 48 hours after he got the final version. And while the governor had told Capitol Media Services earlier Friday he wanted to be briefed on its provisions, he telegraphed his intentions, acknowledging that it would be out of character for him to veto the measure.

"I have been consistently pro-life through my time as governor,'' he said. Ducey has signed every abortion bill that has reached his desk since becoming governor more than two years ago.

The law which takes effect this summer expands on existing statutes which say if there is a live birth, it is the duty of any doctors in attendance see that "all available means and medical skills are used to promote, preserve and maintain the life of such fetus or embryo.''

But doctors who testified during hearings on SB 1367 told lawmakers that they read the current law to require no special efforts if there is no reasonable chance the child will survive.

They said it would be cruel to subject a premature or severely deformed baby to extraordinary measures that will not save its life. Instead, they said the practice is to provide comfort to the baby and, if the family wants, give it to the mother to hold.

The ability to do that under the new law is limited.

First, it provides the first-ever definition in statute being "delivered alive.'' In essence, it says that includes any fetus or embryo, no matter how premature, shows breathing, a heartbeat, umbilical cord pulsation or "definite movement of voluntary muscles.''

At that point, medical professionals are required to do everything possible to keep the baby alive. A separate provision in the law says any clinic that does abortions on women beyond the 20th week of pregnancy must have someone available with neonatal skills to care for the child if born alive. And the state Department of Health Services is now required to develop a list of "protocols,'' exactly what has to be done, along with what equipment must be available in those facilities.

Elizabeth Nash of the Guttmacher Institute, which does research on issues of reproductive rights, said what Arizona has had until now -- the generic requirement to promote, preserve and maintain life -- is similar to that in 34 other states as well as what is required under federal law.

This change, she said, puts greater requirements on Arizona doctors than anywhere else, with only Arkansas having anything close. And Nash said that state does not have requirements for things like equipment that has to be available in cases of live births.

The measure that Ducey signed is not what Sen. Steve Smith, R-Maricopa, initially introduced and shepherded through the Senate. It included an absolute requirement to provide life-saving measures in all situations where an abortion results in a live birth.

When several representatives complained that measure would needlessly prolonging life or suffering, Rep. Eddie Farnsworth, R-Gilbert, crafted language to give doctors an out, sort of, at least in cases of a "specific lethal fetal condition.'' That is defined in existing law as a condition that is diagnosed before birth "and that will result, with reasonably certainty, in the death of the unborn child within three months after birth.''

But Rep. Kirsten Engel, D-Tucson, said during debate that's hardly better than what the new law will require in all other situations.

"If the fetus or embryo is born alive, according to the definition in the underlying bill, there is an absolute obligation to resuscitate,'' she said, with doctors obligated to follow whatever protocols are established by state health officials.

That's true: Even in the those kinds of cases, doctors still will be required to perform "rapid neonatal resuscitation.'' Only when a doctor determines that further treatment "will do no more than temporarily prolong the act of dying when death is imminent'' does the law eliminate the requirement for further medical care.

Engel said it's wrong to mandate even that.

"It will do no more than temporarily prolong the act of dying,'' she said.

And there's something else.

That exception Farnsworth added to taking extensive life-saving measure will apply only to those cases where an abnormality has been diagnosed ahead of time. Doctors are still required to do everything possible for any other live birth, including on a fetus before the point of viability.

Farnsworth was unapologetic for keeping that requirement in place.

He said while the current medical thinking is that viability starts at 24 weeks, that is far from certain. And Farnsworth said medical science is changing.

"You don't ever know when a 20-weeker is going to come out and be viable,'' he said.

But Farnsworth said even in those circumstances, there still are limits on what doctors have to do. And that, he said, comes down to those protocols that state health officials will enact.

For example, he said some doctors testified that they do not have intubation equipment small enough for severely premature infants.

"If they technology doesn't exist, you can only do what you can do,'' he said.

Part of what spurred the legislative action is that question of whether existing law allows doctors to make decisions on an ad-hoc basis of when to try life-saving measures in the case of a live birth.

Cathi Herrod, president of the anti-abortion Center for Arizona Policy, cited a case of an abortion where it resulted in a live birth but the baby girl was allowed to die. Herrod said in that case the girl sat on a cold steel table for 78 minutes without getting medical care.

Farnsworth said having a definition of being alive -- the list including heartbeat and breathing -- removes from doctors the ability to determine what actions to take or not take. And Farnsworth said it makes clear what he believes the existing law already requires, a law he said some doctors ignore by deciding whether a baby is viable.

"You could argue that they've essentially committed negligent homicide,'' he said.