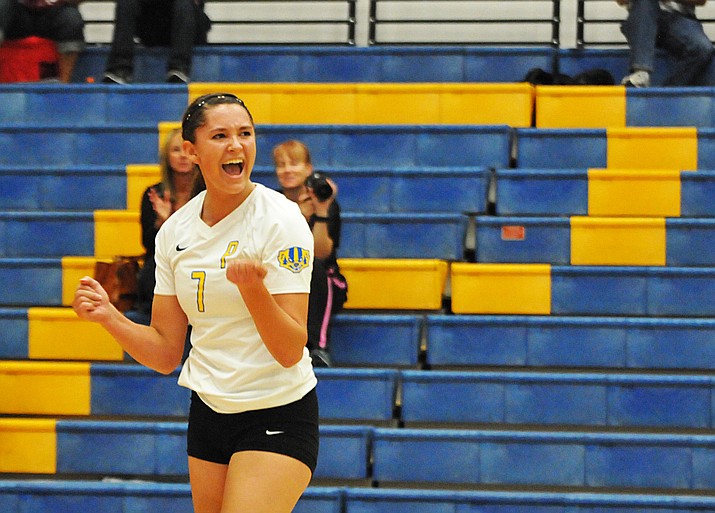 PRESCOTT – Alex Koehler had a match-high 16 kills, Ashlynn Uvila chipped in with 12 kills and 11 digs, but the Prescott volleyball team committed 19 attack errors in a 3-1 loss to rival Flagstaff on Thursday night.

It is the first power point loss of the season for No. 2-ranked Prescott, which hasn’t suffered a defeat at home in the dome to the Eagles since 2012, according to Maxpreps.com.

The Badgers are 7-4 against Flagstaff since 2007, including Thursday night, but have lost four of their last six contests against the Eagles.

“Overall, we need to come together and play more as a team, especially near the end. We got a little frustrated,” Uvila said about a Game 4 loss that saw the Badgers down 20-10 at one point.

Koehler felt the Badgers did a “pretty good job fighting,” but conceded the team needed to play smarter against the No. 4-ranked Eagles.

After tying the best-of-five series at one game apiece, Prescott suffered a 25-20 loss in a pivotal Game 3. When asked why starters Koehler, Abbey Smith and setter Erinn Marroquin were on the bench at the end of Game 3, first-year Prescott head coach Josiah Ramirez said it was a “rotation” issue.

“We got stuck in a rotation … not being able to convert serve-receive,” Ramirez said, adding that Smith re-aggravated a biceps tendon injury during the beginning of Game 3.

“Abbey has been battling an injury for a couple weeks. Tonight, it really started getting to her,” Ramirez said. “Not having her on the court definitely makes an impact, but we as a team need to step up. It takes a team to get to state.”

Smith said after the match she expects to shut it down for the next week before re-evaluating her status.

Other standouts for Prescott included Marroquin, who led the Badgers with 27 assists and 11 digs, while McKella Wright had 13 assists. Dani Dreher also added three kills and three blocks.

“Our effort level was there, but we ran out of gas in the fourth set. We tried to make some adjustments, but unfortunately it didn’t work out for us,” Ramirez said. “Flagstaff is a good program, they are extremely smart. They know how to play the game very well.”

Longtime Flagstaff head coach Beth Haglin said she felt defensively, her club “could have done a better job,” but it’s nice to get a win.

“It’s tough to win in the dome,” Haglin said, adding there were a few Eagles making mistakes who were able to “pull their heads together.”

“They were beating themselves up pretty bad. So, I feel like their mental game lapsed a little bit, but they pulled it together,” Haglin said.

A rematch between Prescott and Flagstaff is scheduled for Tuesday, Oct. 25, at 6 p.m.