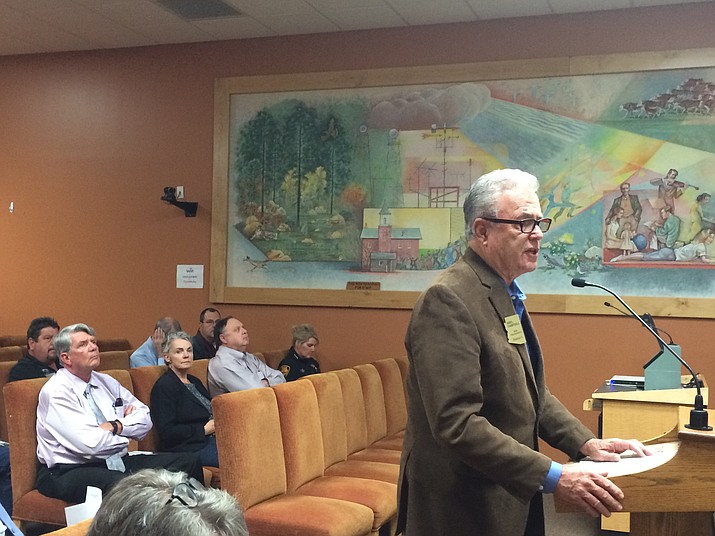 State Rep. Noel Campbell, R-Prescott, speaks to the Prescott City Council on Tuesday, Sept. 27, about the ordinance proposed for sober-living homes. Campbell sponsored the bill that led to the state law that gave cities and towns the authority to more strictly regulate structured sober living homes.

PRESCOTT – Despite reservations by City Attorney Jon Paladini about requiring around-the-clock supervision at local sober-living homes, the Prescott City Council appeared to lean toward including the provision in the city’s new ordinance.

On Tuesday, Sept. 27, the council conducted what could be its final study-session discussion on the ordinance that aims to more strictly regulate structured sober-living homes in Prescott.

The council has discussed the details of the ordinance for months, and this week, Paladini presented the final draft – a 16-page document that includes a host of requirements.

Still, it was with the draft’s suggestion that sober-living home owners would have alternatives to having a manager awake 24 hours/seven days a week that much of this week’s discussion centered on.

It added, however, that “in lieu of the awake house manager 24 hours per day,” the home could instead require regular bed checks or alternate technological means, such as an alarm or other monitoring device, which would be intended to notify the house manager that a resident is in distress or attempting to leave the home during the curfew period.

State Rep. Noel Campbell, who sponsored the bill that led to the state law that gave cities and towns the authority to more strictly regulate structured sober living homes, strongly urged the council not to deviate from the 24/7-awake requirement.

If the city is serious about improving the care in the homes and regulating sober-living homes, Campbell said, “It can only be accomplished by 24/7-awake staff.”

But Paladini maintained that the 24/7-awake requirement would be both difficult to enforce, and difficult to justify if challenged.

Indeed, in response to a question from the council about whether the Prescott Police Department has the staff to ensure that the homes have someone awake 24 hours, Prescott Police Chief Debora Black said, “With our current staffing level, I’d say that would be challenging.”

Even so, a majority of council members voiced support for the requirement.

“I just think the 24/7-awake (component) is such a critical part,” Councilwoman Billie Orr said.

Councilman Steve Blair added that the city should make the guidelines strong enough “to put the fear in the operators,” adding, “I think we owe that to recovery and we owe it to the community to have 24/7 supervision.”

Noting that a majority of the council appeared to favor the 24/7-supervision requirement, Mayor Harry Oberg suggested a revision in the draft ordinance.

Other requirements of the ordinance include: training for house managers; facility licensing; and education and criminal background standards.

The revised ordinance is scheduled to go the council for a possible vote on Oct. 11. If approved, the ordinance would go into effect on Jan. 1.