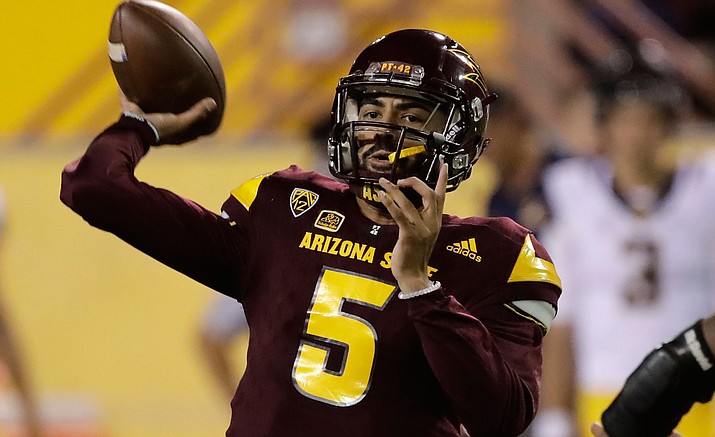 Arizona State quarterback Manny Wilkins (5) throws against California during the first half of an NCAA college football game, Saturday, Sept. 24, in Tempe.

TEMPE — Arizona State picked off Davis Webb twice in the final three minutes, D.J. Calhoun returned a Cal onside kick attempt 42 yards with 48 seconds to play and the Sun Devils rallied to beat the Bears 51-41 in the Pac-12 opener for both teams on Saturday night.

Webb's fifth touchdown pass of the night, 26 yards to Demetris Robertson, cut the lead to 44-41 with 54 seconds to play. But Calhoun grabbed the onside kick try and ran untouched to the end zone.

Manny Wilkins completed 21 of 30 passes for 290 yards and a touchdown for Arizona State and ran 23 times for 72 yards and three scores.

Salamo Fiso's interception set up the last of Zane Gonzalez's three field goals, a 23-yarder that careened off the right upright, to put the Sun Devils ahead for good 37-34 with 2:55 remaining.

On the first play after the subsequent kickoff, Moekiola picked off Webb's short pass and returned it for the score. Webb completed 31 of 55 for 478 yards for California (2-2, 0-1 Pac-12).

California: The Bears led 24-10 at the half before allowing Arizona State to score 34 second-half points, 24 in the fourth quarter

Arizona State: The Sun Devils knew all about Webb. As a freshman at Texas Tech, he threw for 403 yards and four touchdowns in a 37-23 upset victory over Arizona State in the 2013 Holiday Bowl.

California: The Bears return home to face Utah next Saturday.

Arizona State: The Sun Devils go to Los Angeles to play USC on Saturday in a matchup of two teams that lost their Pac-12 openers.