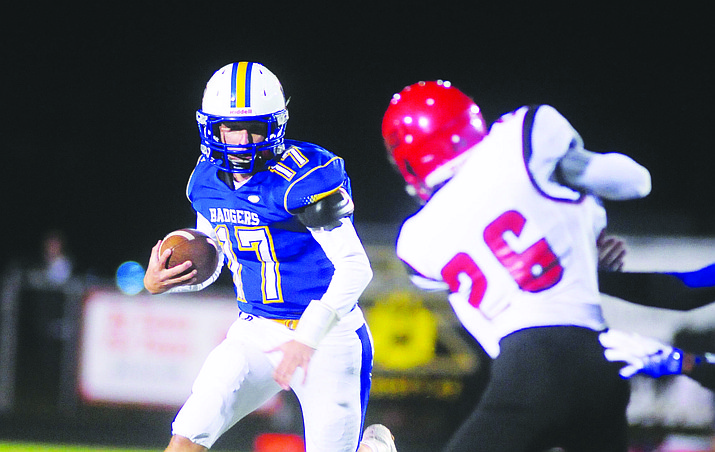 Prescott quarterbackk Ryan Greene looks for a running lane as the Badgers take on Lee Williams on Friday night in Prescott. Greene had three rushing touchdowns and two passing in a 44-12 win over the Volunteers. (Les Stukenberg/The Daily Courier)

Greene completed 11 of 16 passes for 103 yards and added 99 yards rushing on 14 carries for Prescott, which open 4A Grand Canyon region play 1-0.

“I haven’t been doing very well with my passing game [this season],” Greene said after the game. “Tonight it felt good, and I was able to hit my targets. The line was blocking crazy good, we were running like crazy, and it worked so well tonight that we were able to pull out a win.”

First-year Prescott head coach Michael Gilpin said his junior quarterback “struggled” earlier in the season, but he knows “he’s not that kind of player.”

And Friday night’s performance was a step in the right direction, he said.

“He’s a much better player that [we’ve seen]. Whatever mental block he had going on, or set of nerves, or whatever you want to call it, they are starting to clear out,” Gilpin said. “He’s getting his confidence back again. He’s a very dynamic player.”

Gilpin added with the start of Grand Canyon region play, it’s “good timing” that Greene is “coming out of his shell.”

“We need him to be a good football team,” Gilpin said. “We can’t have any falter, any missteps. We have to take care of business, and tonight was an important one.”

Coming off a thrilling 32-29 victory on the road over Moon Valley a week ago, Prescott’s offense methodically took apart a much smaller Lee Williams defensive front in the first half.

Greene hooked up with Dawson Winslow on a 15-yard touchdown strike to put the Badgers up 6-0 with 4:46 to play in the first quarter, then found Aaron Marquardt on a 7-yard touchdown pass to make it 13-0 with 18.3 seconds remaining in the period.

Winslow had four catches for 41 yards and the score.

Greene’s third touchdown on the night came on a 31-yard run, and his fourth was a 3-yard quarterback sneak to make it 27-0 with 3:06 to play in the first half and the Badgers never looked back.

“I knew we had to win last week to get our team rolling … We need to get a winning streak going,” Greene said.

On the ground, Prescott collected over 240 yards rushing. Running back David Pearce had 16 carries for 107 yards, including a 35-yard touchdown run in the third quarter to make it 37-6.

“We did exceptionally well. … Collin [Mills] went down today, so I was glad I was able to step up and help get this win tonight,” Pearce said.

Mills, who had 191 yards and three scores in last week’s victory, managed only four carries for 23 yards Friday night after he was pulled in the first quarter with what was called a “minor ankle injury.”

Defensively, the Badgers held Lee Williams to under 150 total yards of offense, with quarterback Andrew Herrera finding Cody Ferrin on a 16-yard touchdown pass with 41.7 seconds to play in the first half.

Prescott safety Corey Huard, who had two fumble recoveries Friday against the Volunteers, said he was proud of his team’s effort.

“Our defense just kept popping the ball out of their hands, and I was in the right place at the right time, able to jump on the ball,” Huard said. “I think we came out solid, and wanted to punch them in the mouth, and we did that.”