Oktoberfest in downtown Prescott this weekend 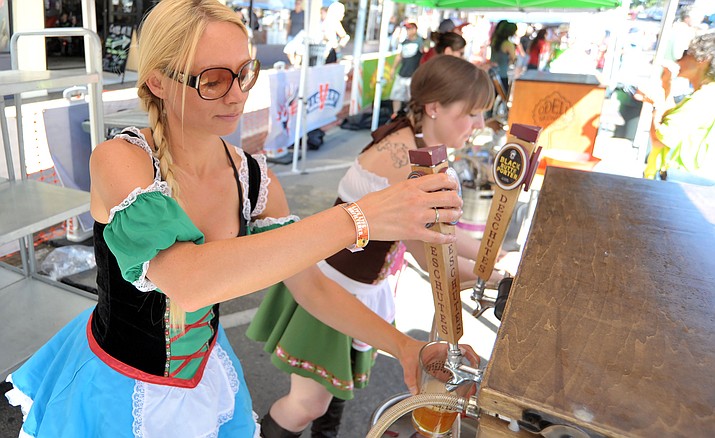 The annual beer festival will take place this weekend, just days after the start of fall. And it will come with some prominent changes this year.

First of all, the schedule will grow from the one-day event of years past to two days – Saturday and Sunday, Sept. 24 and 25.

Event organizer Steve Gottlieb of Eagle Management and Events LLC pointed out that last year’s Saturday-only Oktoberfest brought out significantly more people than the event could handle. This year, the two-day event will allow for more people to attend.

Gottlieb noted that this weekend’s event will allow for admission of 2,000 people each day, for a total of 4,000. Last year, he said, about 2,300 people turned out for the one-day festival, over-stressing the venue.

Last year, when the event took place on a downtown block of Gurley Street, Gottlieb reported that hundreds of people had to be turned away late in the day because the space was full.

As in previous years, this year’s Oktoberfest will come with a wide variety of beer, wine, and food.

In keeping with the German theme, Gottlieb said the Prescott Oktoberfest would feature a number of German beers, from more than 30 brewers.

Among the available beers will be: Weihenstephan: 1516 keller, Weis, Lager, and Festbier; Becks Oktoberfest; Franziskaner: Dunkel weis; and Spaten: Lager, and Oktoberfest, according to the www.prescottevents.net website.

Admission to the event is $20, which includes eight sample tickets per day. Gottlieb noted that the sample glasses would be about a half-pint.

Complementing the beer and wine will be food from about a dozen food trucks – offering everything from pretzels and brats to Mexican food and barbecue.

Bands will be on hand to provide live music on both days.

On Saturday, KDMA is scheduled to kick off at 5 p.m., with Ghetto Cowgirl appearing at 6 p.m., and Black Moods performing at 8 p.m.

On Sunday, Analog Outlaws will begin playing at 1 p.m., with Black Moods appearing at 3 p.m.

The event is a benefit for the Prescott Sister Cities organization, which annually uses its share of the proceeds to help cover the travel costs for local exchange students traveling to Prescott’s Sister City of Zeitz, Germany.