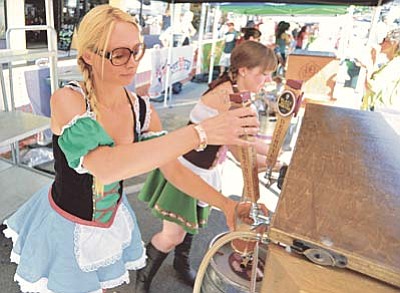 The Prescott Oktoberfest, which is scheduled to take place this weekend, is a fundraiser for the Prescott Sister Cities Association. Over the past three years, the event has raised more than $12,000 for the Zeitz student exchange program, says Margo Christensen, vice chair of the Zeitz Sister City Committee.

Nearly 100 percent of the group’s share of proceeds from the Oktoberfest goes toward helping with travel costs for local students, Christensen said, adding that the

Three years ago, about $4,000 of Oktoberfest proceeds went toward the exchange program, Christensen said. In 2014, when the Prescott Oktoberfest was virtually rained out, the amount dropped to $1,500, but was back up to about $8,000 in 2015.

The student exchange has been going on for several years, since the formation of the new Prescott-Zeitz Sister City partnership. A group of students studying German at Bradshaw Mountain High School traveled to Zeitz in June 2016, and recently returned, Christensen said.

In the coming year, she is hopeful that students from Prescott High School’s new German-language program would also be interested in participating in the exchange with Zeitz.

This year’s Oktoberfest, which will run for two days instead of one, will double the fundraising potential of previous years, Christensen said.

Event organizer Steve Gottlieb of Eagle Management and Events LLC said the Oktoberfest was lengthened to two days this year, after last year’s one-day event attracted more people than could be accommodated.

This weekend’s event will allow for admission of 2,000 people each day, Gottlieb said, for a total of 4,000. Last year, he said, about 2,300 people turned out for the one-day festival, over-stressing the venue.

Also to better accommodate the crowds, this year’s Oktoberfest has been moved to the Prescott Mile High Middle School grounds, 300 S. Granite St.

Admission to the event is $20, which includes eight sample tickets per day. Gottlieb noted that the sample glasses would be about a half-pint.

Complementing the beer and wine will be food from about a dozen food trucks – offering everything from pretzels and brats to Mexican food and barbecue.

Bands will be on hand to provide live music on both days. On Saturday, KDMA is scheduled to kick off at 5 p.m., with Ghetto Cowgirl appearing at 6 p.m., and Black Moods performing at 8 p.m.

On Sunday, Analog Outlaws will begin playing at 1 p.m., with Black Moods appearing at 3 p.m. Gottlieb noted that Tim’s Auto Group is a major sponsor of the event.