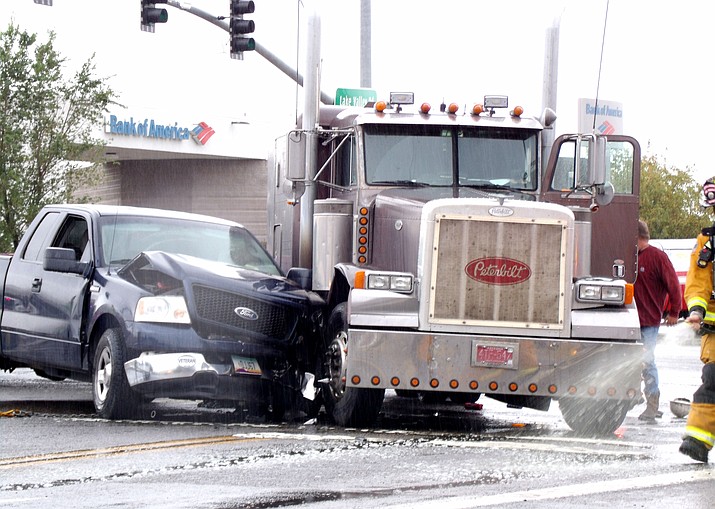 A pickup truck and semi truck collided on Highway 69 at Lake Valley Road in Prescott Valley. Prescott Valley Police diverted east bound traffic to side roads as Central Arizona Fire personnel took care of a large gas tank that detached from the semi as a hazardous material incident Tuesday morning.

Police investigating an auto burglary Saturday, Sept. 17, in the Granville subdivision arrested a teenage suspect in several similar auto burglaries near the scene, according to PVPD Lt. Jason Kaufman.

Officers were in the 6600 block of East Tenby at about 3 a.m. when a victim pointed to the boy nearby, and when officers tried to approach him, he ran off, carrying a duffel bag.

After a foot pursuit, police caught the boy near Brighton Road and Bentley Court.

“During the investigation it was discovered the juvenile had committed numerous auto burglaries. Additionally, the juvenile was a runaway, was intoxicated, and had a probation warrant,” Kaufman said.

The suspect, a 17-year-old, had discarded the duffel bag, and when police found it, it contained several cell phones, garage door openers, and knives.

The suspect was booked into the Yavapai County Juvenile Detention Facility, charged with several counts of felony auto burglary, runaway, minor intoxication, and the probation violation.

“Most of the victims’ vehicles were left unlocked with valuables left inside of them, including garage door openers, which allowed the suspect access into the garages as well,” Kaufman pointed out.

The Tribune does not release the names of juvenile suspects.

One man was killed and a second seriously injured when the pickup truck rolled over on Highway 89A near milepost 328 on Saturday, Sept. 17, a Department of Public Safety spokesman said.

Dexter Purley, 26, of Humboldt, was killed when he was ejected from the vehicle along with Theodore Simpson, 49, also of Humboldt, DPS spokesman Quentin Mehr said.

The pickup was headed north on Highway 89A just after 2 a.m., when “the pickup swerved right into the emergency lane then left, driving across the southbound lanes of traffic. The pickup went into the median and began to roll over,” Mehr said.

Both men were airlifted to Honor Health North Mountain. Simpson was admitted for treatment of serious injuries. Purley died at the hospital.

Neither was wearing a seatbelt.

A man was seriously injured Saturday, Sept. 17, when he crashed his motorcycle on Highway 89A, according to a Department of Public Safety spokesman.

It happened about 6:40 p.m. when the man lost control of the cycle at milepost 330, DPS spokesman Quentin Mehr said.

He was not wearing a helmet, Mehr said, and was taken to Flagstaff Medical Center.