Putting Chino Valley on the global map
Gunsite brings 2,000 students from around the world every year 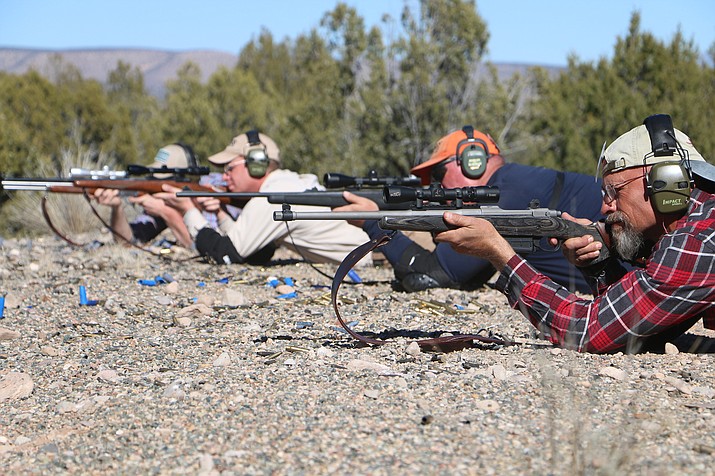 In September of 1976, the author, columnist, professor and World War II and Korean War combat veteran Colonel Jeff Cooper combined his knowledge of education and firearms training into lesson plans to create the American Pistol Institute. These days, it’s known as Gunsite Academy. Located between Chino Valley and Paulden, the facility is celebrating its 40th anniversary this month.

As far as the staff knows, Gunsite Academy is the oldest shooting school in the world, according to Chief Operations Officer Ken Campbell.

“Nobody else that we’re aware of can say that they’ve been doing this for 40 years,” he said. “One of the unique things about it is that so many people in the community here have no clue what a gem we are in the community, in the state for that matter.”

Gunsite Academy brings in about 2,000 students from all over the country, and some internationally, every year, Campbell said. Clients the academy attracts come from all over the spectrum, from the little old lady who’s a door greeter at Walmart to celebrity clients, professional athletes, military special operations members and law enforcement officers from the United States as well as friendly foreign nations, he said. While Gunsite is discreet about which celebrities train at the facility unless they give the go-ahead, Campbell was able to say that Tom Selleck attended. As a whole though, Gunsite’s predominant client is an average person, which is what the academy was originally set up for, Campbell said.

When Gunsite Academy first opened, it was 162 acres with two square ranges and one live fire shoot house, Campbell said. Forty years later, it spans 2,800 acres with more than 20 ranges, which include live fire shoot houses and an outdoors simulator, Campbell said. The classes have expanded too. In 1976, there were three pistol classes and in 2016, Gunsite Academy offers much more, such as classes in pistol, carbine, shotgun, long range rifles, hunting rifles, edged weapons, street crimes, citizen response to active shooter and emergency medical based on an active shooter situation, he said.

Many who have undergone instruction at Gunsite Academy have found the experience to be positive, with more than 400 people giving it four or five stars on the academy’s Facebook page. In 2013, John Moody rated it five stars and said Gunsite Academy “radically changed how I approach training, mindset and marksmanship,” adding that he recommends attending a class at the academy.

“I promise you will learn more than you thought, even if you thought you knew it all,” he wrote.

Mindset is what makes Gunsite Academy different from other shooting schools, Campbell said, noting that if they can teach avoidance and awareness, that’s a big win.

“If you can come out of the store without having your head buried in this iPhone … your head is up, alert and aware,” he said, bringing up that if something is making the person uncomfortable about someone or a group of people, “you’re aware and they recognize that too and you’re less of a victim to them. So, we teach that as well and I don’t think that’ll ever change. What we hold in our hands to use as tools is not the answer. As long as we stay focused on teaching the mindset part of it, we’ll forever grow … Whatever the technology is, we’ll adapt to it, but we’ve got to stay focused on the mindset.”

Gunsite Academy has been around for 40 years because of the instructors, Campbell said. Even in the first class, the instructors were top notch, he said, acknowledging an assistant instructor by the name of Bruce Nelson. One of the early modern day holster makers and a California law enforcement officer, Nelson was a legend back then, he said.

Gunsite’s instructors still have that level of expertise, Campbell said. One of the instructors who teaches the extreme long range rifle, which is shooting at a target more than 2,000 yards away, spent 25 years in the army special forces and retired as a sergeant major, was a contractor for 10 years and was the 50-caliber extreme long range world champion for two years in a row, he said.

“That’s the caliber of instructors that we have,” Campbell said, mentioning that Gunsite Academy has about 10 full time staff members with about 60 adjunct faculty members that are subject matter expertise brought in to teach whatever their expertise is. “Predominantly, they’re military law enforcement … we also have some other specialty instructors that are safari hunters, because we teach a North American game and a safari hunt class … and some doctors … one of the two doctors came out of naval special warfare. He worked for Joint Special Operations Command.”

Cooper died in 2006 and Gunsite is now owned by Buzz and Sonya Mills with Cooper’s widow, Janelle, still living on the property, Campbell said. However, Gunsite Academy wasn’t the only aspect of Cooper’s legacy as he wrote the four rules of gun safety that are universally accepted, he said.

The four rules are: All guns are always loaded; never let the muzzle cover anything you are not prepared to destroy; keep your finger off the trigger until your sights are on the target; be sure of your target.

Safety drives everything at Gunsite Academy and those rules are posted everywhere, even in the restrooms, Campbell said.

“If you violate one, it’s a bad thing. If you violate two of them, it’ll probably be a tragedy,” he said. “If you can burn those into your consciousness and make them a part of your everyday life, the chances of having a tragic error are greatly reduced.”

Gunsite Academy is forever looking forward, Campbell said, using the citizen response to active shooter class as an example. The class started this year, which drew the attention of Fox News Network following what happened in Paris and San Bernardino, he said. However, the class was added a year ago as it takes that long to put a class together, Campbell said, stating that Gunsite Academy has to be continually evolving based on what’s happening in society.