Battle heats up against legal pot 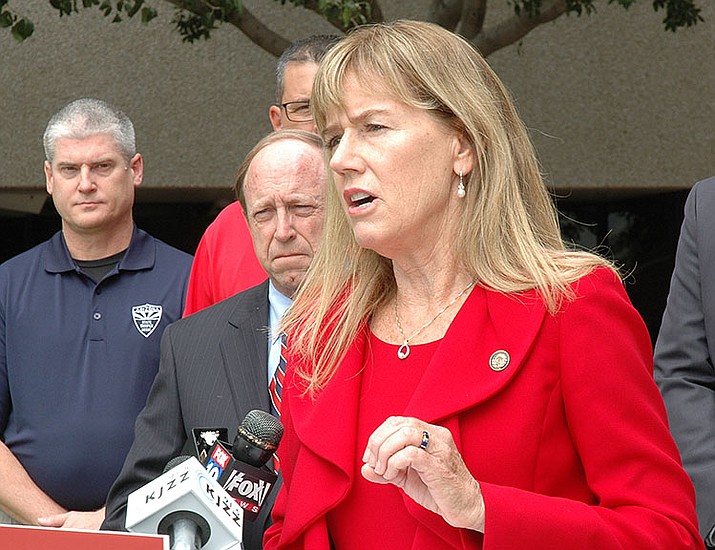 PHOENIX — The mayor of Colorado’s second-largest city is urging Arizonans not to legalize recreational use of marijuana even as he admits voters in his state want to keep their nearly 4-year-old law.

Colorado Springs Mayor John Suthers said the law approved by voters there has had dire consequences, including increased teen use and more criminal activity. And he said there is probably less support for the measure than when it was approved in 2012 by a margin of 54.8 percent to 45.1 percent.

People at least 21 years of age or older would be permitted to possess and use one ounce or less of marijuana and grow up to six plants in their homes.

Establishes fines for smoking or using in a public place, underage use, unauthorized production, and possession over legal limits.

Establishes a Department of Marijuana Licenses and Control, which would regulate cultivation, manufacturing, testing, transportation and sale.

A 15 percent tax would be levied on the sale of marijuana. Revenue would be deposited in a Marijuana Fund and distributed to the Department of Marijuana Licenses and Control and the Department of Revenue, localities where marijuana establishments exist, school districts and charter schools, and Dept. of Health Services.

But not that much less.

“Do I think that the citizens of Colorado would repeal it tomorrow? Probably not,’’ he said.

Suthers said Proposition 64 remains popular in his home state because voters are uninformed.

Suthers and a police officer from Colorado were brought to Arizona by foes of Proposition 205 in a bid to convince voters here that that state’s 2012 law has created new problems.

“This is clearly not guesswork,’’ Polk continued. “Colorado passed a similar initiative for recreational marijuana in the year 2012 and is now suffering a whole host of negative consequences.’’

But Suthers, under questioning, acknowledged that not all the claims can be linked to that law.

For example, he is not disputing statistics from the Colorado health department that show teen use of marijuana has not increased since recreational use became legal after the 2012 vote. Instead, he said, the big jump actually came after the 2006 vote to legalize medical marijuana -- laws similar to what Arizona already has.

But Suthers said Arizona faces a bigger risk because its teen drug use now is lower than it was in Colorado in 2012.

Anyway, Suthers said if Arizona voters are not convinced that the law voters in his state adopted was a mistake, they should not follow suit, at least not now. He said Arizona should wait until the Colorado law has been in effect for five full years — meaning two years from now — to see whether they still believe recreational use of marijuana is desirable.

That’s also the message from Jim Gerhardt, an officer with the Thornton Police Department and vice president of the Colorado Drug Investigators Association. He said legalizing recreational use did not reduce crime as had been advertised and urged voters here to “take a hard look at what’s happened in Colorado.

“There’s absolutely no reason to rush into this,’’ Gerhardt said. He said it’s easy for voters to adopt laws allowing recreational use but “it’s very, very difficult to undo what we’ve done.’’

As bad as they say the Colorado law is, Polk and other foes have pointed out there are some substantial differences between the law there and what voters here are being asked to approve, differences they say make the Arizona proposal even worse.

For example, the Colorado law makes the presence of five nanograms of THC, the psychoactive ingredient in marijuana, a “permissible inference’’ for jurors to conclude a motorist is impaired.

Proposition 205 does say driving while impaired remains illegal. But there is no similar language, meaning prosecutors would have to prove, on a case-by-case basis, that an individual was actually impaired while behind the wheel.

In Colorado, cities can refuse to allow marijuana dispensaries. There is no such option in the Arizona measure.

Proposition 205 would allow for home delivery of marijuana.

And the Arizona Constitution sharply restricts the ability of lawmakers to make changes in the initiative if there are unanticipated problems.

Only amendments that “further the purpose’’ of the voter-approved law are permitted, and only with a three-fourths vote of the House and Senate; more radical changes have to go back to the ballot.

John Ortolano, president of the Arizona Fraternal Order of Police, said the Colorado experience shows there are reasons for concerns about public safety if Arizona adopts a similar law.

“There is no doubt that in this state that if Proposition 205 passes that more citizens in our state are going to be killed by people that are driving under the influence of drugs,’’ Ortolano said.

While Suthers said Tuesday that Arizonans should reject Proposition 205, he did offer up an alternative: Decriminalize small amounts of the drug for personal use, as Colorado did before it went the next step of legalizing it. He said that would allow individuals to have up to an ounce of marijuana with the penalty being no more than a fine.

That proposal, though, drew a decidedly negative reaction from Polk.

“Our campaign does not support anything that results in more kids using pot,’’ she said. Polk said marijuana use by Colorado teens is 74 percent higher than the national average, as compared with 15 percent in Arizona.

“Our goal is to decrease that rate, not increase it by removing deterrent measures.”