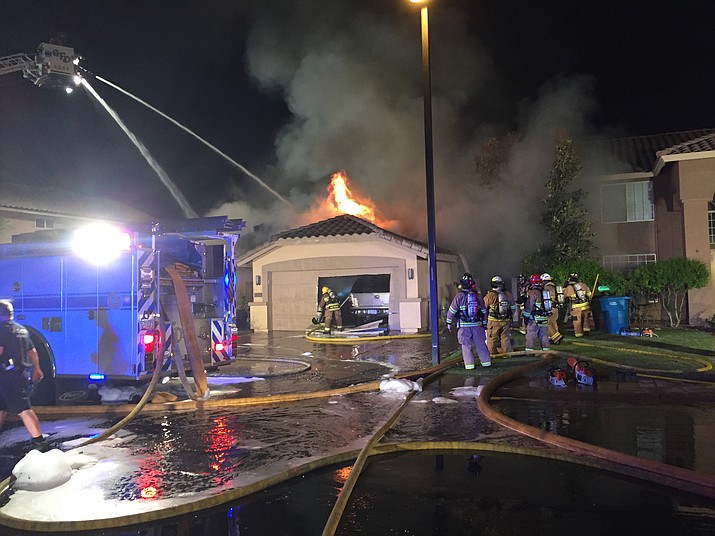 Firefighters extinguish flames caused by a plane crashing into a home in Gilbert, Ariz., on Saturday, Sept. 17, 2016. Federal investigators are trying to determine what led the plane carrying several skydivers to crash. The pilot and four skydivers were able to parachute out.

GILBERT, Ariz. (AP) — Federal investigators are trying to determine what led a plane that had been carrying several skydivers to plummet into a suburban Phoenix home.

Gilbert Fire Department spokesman Gary Hildebrandt says National Transportation Safety Board personnel are at the crash site Sunday and that firefighters are assisting in the investigation.

Authorities say a Cessna 182 aircraft was carrying a pilot and four skydivers Saturday night as part of Gilbert's annual Constitution Fair when the plane crashed for unknown reasons.

According to Hildebrandt, the plane's occupants were able to bail out and parachute to safety before the aircraft struck the house.

Hildebrandt says the pilot was taken to a hospital with burns to his forearms but that his injuries are not life-threatening.

A husband and wife inside the home escaped injury.

Fire officials say the house is a total loss.