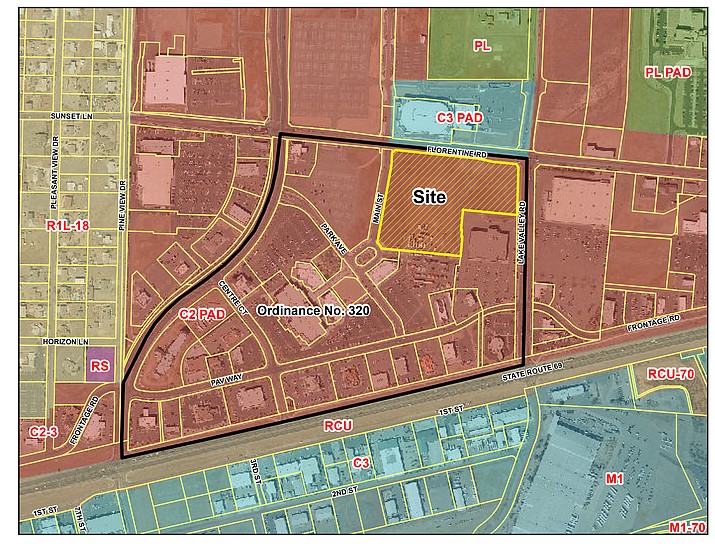 The location of a new 214-unit apartment complex in Prescott Valley's Entertainment District that was approved by the Town Council.

Approximately 9.44 acres of the Prescott Valley Entertainment District is scheduled to have a different zoning designation starting in late September which will allow for the construction of new apartment buildings. It’s a project the Town of Prescott Valley has been working on and looking at for the last two and a half years, said Councilmember Mary Mallory at a public hearing regarding the zoning map change at the Prescott Valley Town Council Meeting on Thursday, Sept. 8.

“When it comes to the General Plan of Prescott Valley, this is part of the vision,” she said. “So we’re following what the citizens have voted for in the general plan and the road map that we’re going toward and it’ll bring energy to the downtown area.”

The zoning map change, requested by Fain Signature Group, switched those 9.44 acres in the town center from Commercial; General Sales and Services to Residential; Residential and Services – Planned Area Development, said Town Planner Carmen Ogden. The change comes after the Town Council and Planning and Zoning Commission held a joint work study in January of 2014 to discuss an amendment to the general plan that would allow for a high rise residential apartment complex of about 214 units on that parcel of land, which is on the southeast corner of Main Street and Florentine Road, she said.

“At that time, the concept was proposed as a way to bring new energy to the downtown area since commercial development had stalled with the recession,” Ogden said, adding that the area “was believed to encourage high density residential development in the area.”

The preliminary development plan for the complex, called the Talking Glass Apartments, consists of 14 apartment buildings with 214 units, 393 parking spaces, 15 of which are designated for handicapped and a clubhouse which features a conference room, leasing area, maintenance room, theater, fitness and multipurpose room, second floor game room and rooftop patio, Ogden said. Further, accessory buildings include ramadas, a pool area, cabana, pool equipment enclosure, refuse structures and a dog park in the center of the complex, she said.

In July of 2015, there was a neighborhood meeting held by Fain Signature Group which was attended by five people, two of which represented the applicants and three members of the community, Ogden said.

“The community representatives all voiced their support for the project,” she said. “They saw the potential benefit of having residential within walking distance of the entertainment center, grocery stores, banks, restaurants, etc. and as an asset to the surrounding business areas in the area in general.”

Councilmember Stephen Marshall voiced his concern that the original bondholders for the Prescott Valley Event Center could sue the town as the apartments were not in the original planned development, which Town Attorney Ivan Legler said there was concern about that when the settlement was done in 2014. As such, the bondholders agreed not to sue in the settlement document, Legler said, adding that the town anticipated that they’d be applying additions to the development plan and the bondholders understood that it would strengthen the downtown and the Event Center.

Councilmember Lora Lee Nye voiced her excitement about the project.

“As far as I’m concerned, it’s going to energize the whole area. It’s something that’s been lacking,” she said. “I think it’s going to be a jewel in the crown right over there.”

The Council voted in favor of the zoning map change except for Marshall who abstained.